When we first wrote about Kabbage just over a year ago, it was a fledgling endeavor with only eBay merchants as customers. But Kabbage now serves merchants who use Yahoo! stores, Etsy, Amazon, and Shopify, as well as eBay. In July Kabbage will be launching in the U.K., its first foray outside the U.S. Kabbage has roughly 20,000 customers, and 80 percent are repeat users.

Established in 2009, Kabbage’s growth is primarily attributable to the indifference traditional lenders show to very small businesses. “Banks will not lend to anyone with a credit score of less than 720,” says Kabbage’s COO and co-founder Kathryn Petralia. The process is time-consuming, involves many forms, and usually a small business is still turned down. If a line of credit is approved, the small business owner usually has to put up personal assets — such as a home — as collateral.

Kabbage’s criteria for extending credit are very different from traditional banking standards. The company does not turn down anyone with a bad credit score as long as the applicant meets the minimum monthly revenue requirements. Customers do not have to pay application or origination fees. And Kabbage has very little delinquency, according to Petralia. “Our biggest surprise was how cash-starved small online businesses are.” Acquisition of inventory is the main use of Kabbage funds, with about 75 percent of customers using it for that purpose. Merchants are often offered volume merchandise deals at substantial discounts, but they need to purchase and pay immediately. Often they don’t have the cash flow to take advantage of the opportunity. That’s how Kabbage helps out. Other uses of funds are marketing and seasonal hiring.

As for the large difference in interest rates between traditional bank loans and Kabbage’s rates, Petralia states, “Our customers care much more about access to capital than fees. It’s more of an ROI [return on investment] conversation than an APR [annual percentage rate] conversation.”

Since its inception, Kabbage has lowered its rates. The lowest rate was five percent for 30 days when Kabbage started; it is now down to two percent. 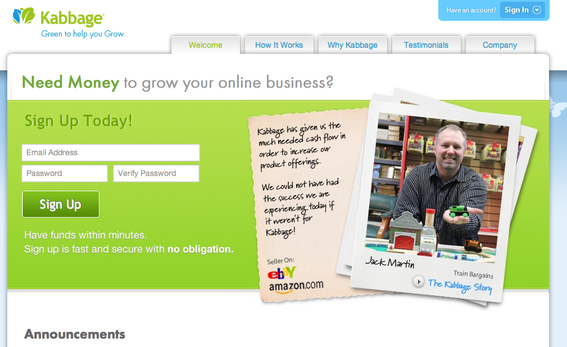 Kabbage can approve a line of credit and transfer funds to a merchant’s PayPal account within an average of seven minutes. “Our businesses are more than just a credit score. A large, or even a small bank, cannot originate a loan of less than $100,000. It isn’t economically feasible for them. Kabbage offers lines of credit as low as $500 up to $40,000,” advises Petralia. The company is testing higher limits. Kabbage’s largest customer generates $8 million in annual revenue.

The company wants its customers to build a profile. Petralia counsels that the more data customers can make available, the better their chances of receiving greater amounts of capital. In September 2011, Kabbage introduced Social Klimbing, which gives small businesses access to capital based on social network activity. Social Klimbing allows customers to connect their Kabbage accounts to Facebook Fan pages and Twitter feeds. Customers will automatically gain access to more funds as they increase followers, activities, and buzz on Twitter and Facebook.

This year Kabbage’s goal is to aggressively pursue data relationships with platform providers. “We want to be on all the marketplaces. We want to be able to help customers wherever they sell,” says Petralia. Kabbage will soon integrate with Magento, according to Petralia.

Now that Amazon is a partner, funds can be moved to customers via ACH — because that is what Amazon uses — and PayPal. Kabbage would like to partner with other payment processors as well.

In business since 2004, Isaac Olagunju, owner of Clevershoppers, sells a variety of merchandise on eBay and his own site. He started using Kabbage in 2011 when he saw a banner ad on eBay. According to Olagunju, without Kabbage, it would have been a serious challenge for Clevershoppers to survive this year. “Like so many businesses out there, we were facing serious cash flow issues early this year, and we couldn’t get our bank to work with us even though we’ve been with them since 2004 with a line of credit.”

Before engaging with Kabbage, Olagunju looked at Prosper and Rapid Advance, other funding mechanisms. Other lenders would have required a change in his merchant processor. “Kabbage makes sense because it lets us do our business the way we want. We can pay our loan back in one week or a month without penalty.” But Olagunju does say that the higher interest rate — compared to the rate of a bank line of credit — is a bit of a hit. He had an annual rate of 7.25 percent for a line of credit at Bank of America. “I would love to see in the future a way for businesses who have worked with Kabbage and established a relationship to have the opportunity for funding at a lower interest rate,” says Olagunju. Another criticism is that Kabbage’s monthly customer statement is not user-friendly, lacking a good itemization of the interest calculation. Nevertheless, the email-based customer service is outstanding, according to Olagunju.

McMillan Books is a seller of rare and out-of-print books. Jennifer McMillan and her husband David started the site in 2001 as a hobby and moved to a full-time business in 2005. Besides their own site, the McMillans sell on Amazon, eBay, and Barnes & Noble.
Before signing up with Kabbage in the summer of 2011, the business was self-financed, but sales were stalled. Kabbage helped the company buy more inventory. “We had immediate opportunities for inventory purchase, and without the ready cash, we were not able to take advantage of them,” says McMillan. But she was reluctant to go to a traditional lender. After finding out about Kabbage on a blog, the McMillans signed up, and 2011 sales nearly doubled over 2010.

The business started with small loans. As McMillan Books paid them off, Kabbage increased the amount of capital available. Jennifer McMillan likes Kabbage because the company understands ecommerce. “I’m grateful to Kabbage for what they’ve done for us. The loan process is easy, convenient, and quick. Without them we would not have been able to grow our business.”