A New York-based rich-media technology firm has released a new platform that may make it easier for online retailers to produce product-detail videos with little more than product images and a microphone.

Qwiki first announced its Creator platform in May 2012 and set up a private beta test that included developing a series of brief news videos with ABC. On June 28, 2012, Creator was released to the general public.

The company also released an API that may make it possible for developers to programmatically create video — such as the aforementioned product description videos — and embed them on a site.

Qwiki requires simple registration, but that is nearly the only barrier to using its Creator platform. Once a user has registered, Qwiki shows a short explanatory video and lets the would-be video maker get right to work. 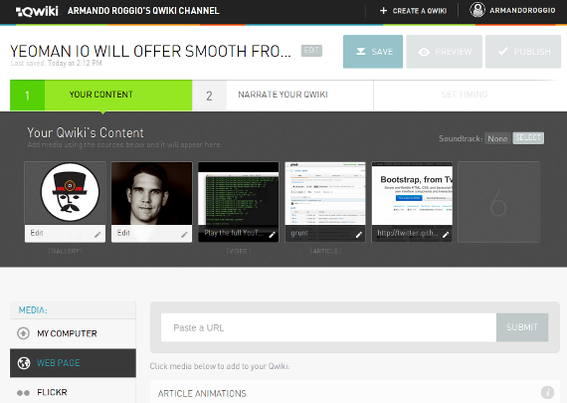 The Creator allows for three ways to narrate the new Qwiki. A user may upload already recorded video, record video via a webcam, or add text that Qwiki’s robot can read. The beta version of the Creator solution did not offer text-to-speech, but it is a nice upgrade, removing potential hurdle for use — an ability to capture good video with a webcam.

If a user chooses to upload a text file, the Creator provides an audio preview so that there are no surprises regarding how the video will sound.

As a third step, Creator allows the user to manage the video timing. So that any uploaded images or videos coincide with the narration.

Once a new Qwiki has been published, it may be embedded on nearly any web page.

Here is an example Qwiki created to cover the announcement of a new web development project.

For online retailers, especially small or mid-sized businesses with relatively limited video production resources, Qwiki Creator might be used to make short product description videos that could be added to product detail pages.

The Qwiki video below shows how Creator might be used to feature a product on its detail page.

Qwiki also offers an API — i.e., application programing interface — that may make it possible to create short videos automatically, like the one above, using a script.

This might mean that an online merchant could produce simple product description videos for every product offered with very little upfront investment.