The MotoGP Store volunteered for an SEO Report Card. This is the second installment of my analysis of that site. In “Part 1,” I reviewed the home page and category pages, internal navigation, HTML templates, title tags and keyword choices on, again, The MotoGP Store. Now I’ll look at URLs and duplicate content, indexation, internal linking, inbound links and the store’s international SEO aspects.

Most ecommerce platforms have some form of duplicate content. In MotoGP’s case, every category and subcategory page has nine duplicate copies, and every product page has four duplicate copies. In this case, the sources of the duplicate content are easy to identify. Each category and subcategory URL is available with a trailing slash and without. In addition, each of the four currencies adds a “cur” parameter to the end of every URL. Google has managed to index over 3,000 of the currency parametered URLs. 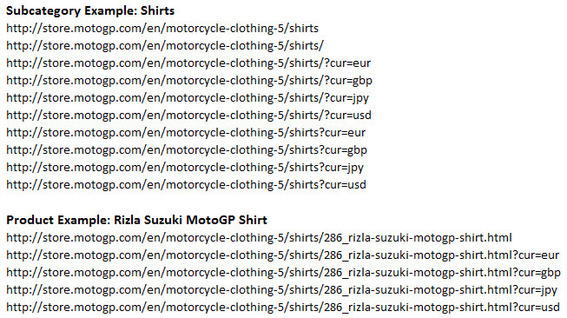 These extra URLs add no search value, but are required for customer usability. In terms of SEO, the duplicates simply split link popularity between multiple versions of the same page and create self-competition. Based on the rankings and the site’s web analytics, the engines prefer the URLs without the trailing slash, likely for the simple reason that those URLs are used in the header navigation.

Aside from the navigation, which I discussed at length in “Part 1” of this report card, The MotoGP Store lacks cross-linking features, which could serve to further strengthen the flow of link popularity through the site. The breadcrumbs on every page do serve as cross-linking, but also mimic the URLs linked to and from the header navigation. As such, they’re less powerful than a link not already featured on the page. The recommended products feature on product pages would work nicely as a cross-linking feature, but it isn’t crawlable on the page for search engines crawling without JavaScript.

The store itself doesn’t have many valuable links to speak of, but its domain of motogp.com is heavily linked to on Wikipedia and linked to regularly on the U.K.’s BBC television site as well. These valuable links help to boost the authority of all the pages on the domain, including the store. If The MotoGP Store weren’t the official store for the official MotoGP site, it would likely have a much harder time ranking for its targeted keywords and phrases with the site as it is today. But because the domain as a whole enjoys authoritative links from authoritative sites, the store is given more leeway in the rankings than it might otherwise have.

In addition, when MotoGP launched its store in May 2011, an announcement was issued that linked to the MotoGP Store. This very short press release was widely reposted on MotoGP enthusiast sites around the world, many with the link still intact. Known as optimized press releases, including active links in press releases or announcements that contain newsworthy information can be an excellent source of building links. The links will likely be primarily from smaller and less valuable sites that repost content found on other sites or blogs, but it’s an easy way to build a quantity of links to get the link building ball rolling.

I have to admit, I’m surprised. When I saw that the store was available in European English, Spanish, French and Italian, but had currency links for U.S. dollars, the British pound, euros, and the Japanese yen, I was skeptical that the search engines would be able to untangle the web of country and currency to deliver the correct page to the correct searcher in the correct country. However, after looking at The MotoGP Store’s web analytics, it appears that they have done just that. Queries in Spanish unfailingly land on Spanish pages. Queries from Spain land on Spanish pages. Queries from Australia land on the U.K. site.

In short, MotoGP has done an excellent job with its geotargeting technology. Most important of all to SEO, the user can change the country/language by clicking the flags in the upper right corner and the country/language choice persists even when JavaScript, CSS and cookies are disabled. This is fantastic. Because search engines traditionally crawl without JavaScript, CSS and cookies, the ability to navigate to other country/language sites without these enabled is critical. Otherwise, Google and Bing may be stuck on the U.S. or U.K. site. Even if they can crawl the full suite of countries a site offers using headless browsers — automated crawlers that emulate browsers that human customers would use — some SEO signals often gets lost in the translation.

The hardest part about writing this report card has been noting the things MotoGP Store could be doing better according to best practices SEO, and then looking at the rankings it is already winning for the top phrases in its niche. Do best practices matter for The MotoGP Store? Will resolving these things make them rank better? Well, in the cases where it already ranks number 1, no. You can’t rank better than number 1. You can, however, improve a site to protect those top rankings for the future. If a competitor improves its site enough to challenge MotoGP’s store, those relatively few available searches for the MotoGP merchandise keyword market could begin to go to competitors.

On the other hand, could improving the site according to SEO best practices actually result in a decrease in rankings? Well, yes. SEO is part science and part art. We rely on the data-driven side of SEO to make business decisions, but there’s another side of SEO that’s frankly unpredictable. The sites that tend to have the most success in SEO over the long term are the sites willing to experiment. Change one aspect of the site, measure the impact, and if it didn’t result in improvement then roll it back. Then try another change, measure the impact, and act on the resulting data.

SEO best practices can only get you so far because they’re generalized across all sites in all instances. No individual site is the average site, however. Make the exact same change on five sites and invariably it will result in five slightly different results. Best practices SEO can identify the changes that are most likely to result in success, but only implementing them and measuring the impact can determine whether those changes have actually been successful.

By the book, then, an SEO professional would grade the site at a C level, perhaps C+. But based on its success in the rankings and the amount of traffic driven for those top phrases, MotoGP Store is dominating this SEO niche. Therefore, in a tip to reality and the poser of an authoritative domain and link portfolio, the store’s “reality” score is an A-. 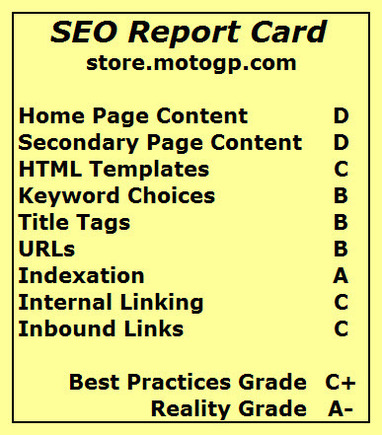 I’d love to see this site implement some of the best practices discussed here, measure the impact, and write another “SEO Report Card” in a year or so. While the site is dominating the major phrases, it doesn’t seem to be doing as well on the long tail phrases for risers and specific products. It’s likely that SEO best practices around navigation, category landing pages and internal linking could improve the long tail while retaining the strong hold the site already has on the trophy terms for the MotoGP merchandise niche.