One of the best ways to get traffic to your website is through the use of social sharing buttons. The problem, however, is that while many social sharing options exist, their features vary. Some offer fewer sharing options, some only work on WordPress, and some require more technical expertise to install and configure.

Here is a list of 10 social sharing alternatives that I have tested and recommend. A few are plugins designed specifically for WordPress, but others can be used on almost any website.

ShareThis is one of the more popular social sharing options.

Used by thousands of sites, ShareThis is one of the most popular sharing tools. It is not limited to WordPress either. Practically any site can embed ShareThis buttons.

Many button styles are offered, small to large, and can display social reach numbers — i.e., the number of times a post has been shared. ShareThis also has one of the largest selections of social sites, including Facebook, Twitter, LinkedIn, Google+, StumbleUpon and many others. However, one drawback is that it does not support Pinterest.

ShareThis includes the capability for both static and “floating” sharing widgets, in either vertical or horizontal orientations.

According to its website, Socialize — a WordPress plugin — was designed to make managing and adding actionable social sharing buttons easier and more efficient.

Buttons can be added either inside a blog post or in a box below. The box contains text that encourages readers to subscribe to the blog and leave comments. Additional text can be included, such as calls to action or product mentions.

Socialize offers 12 of the most popular buttons including Pinterest and Buffer, a relatively new app that enables readers to schedule sharing times in order to increase reach and visibility.

AddThis functions in a manner similar to ShareThis.

AddThis works on most any website, not just to WordPress. Buttons can be personalized to show users the services that they use most often, and integration with over 300 services — Facebook, Twitter, LinkedIn, many more — is available. AddThis also includes Pinterest as a sharing option. 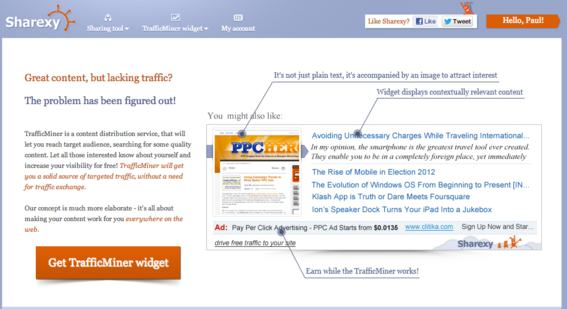 Sharexy gives users the capability to customize not only the look of sharing buttons, but placement either at the top or bottom of the post, as well. Users can choose from over 20 social networks to share with, and sharing via email is also included.

Like ShareThis and AddThis, Sharexy can be used on any type of site. A WordPress plugin is also available.

Sharexy offers both static or floating sharing widgets that can be positioned on the left or right hand side of the page, or at the top and bottom, depending on the user’s preference.

Digg Digg is a WordPress plugin created by Buffer.

Customization choices include a floating bar that resides on either the left or right hand side of the page, or at the top or bottom of the blog post. Support for email and print are also included. 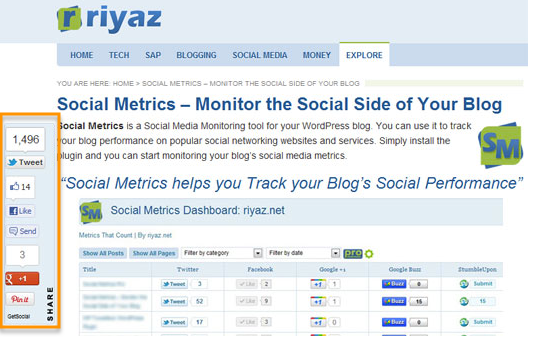 GetSocial is a WordPress plugin.

Buttons can be re-arranged in the order preferred by using simple drag-and-drop functionality. If desired, buttons can also show the number of share counts. Both static and floating versions are available.

Slick Social, which is also a WordPress plugin, not only offers the same features and sharing capabilities as others on this list, but users can see summaries of sharing metrics via an administrative panel. 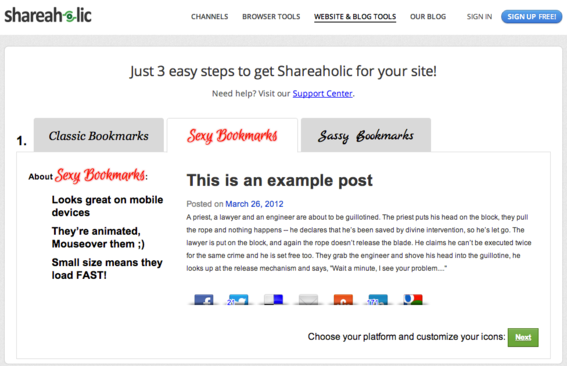 Shareaholic offers three different button styles: Classic, Sexy, and Sassy. The latter two are designed specifically with mobile devices in mind and, to add an element of interactivity, the “Sexy” version buttons animate when a reader mouses over them. 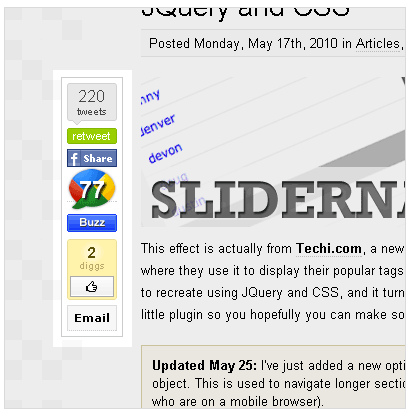 WordPress plugin Sharebar adds a fully customizable vertical box to the left of a blog post that contains buttons to popular social networking sites. If the page is resized below 1,000 pixels, the vertical bar disappears and a horizontal sharing bar appears under the post title.

Social Media Widget allows users to input their social media website profile URLs and other subscription options to show an icon on the sidebar.

It supports many of the same social media sites as others on this list, but also includes support for Orkut, Friendfeed, Flickr, Picasa, Pandora, iTunes, and many others. RSS subscription and email sharing are included, as well.

Sharing works best when the buttons are located in a way they can be easily spotted by site visitors. Here are a few social sharing dos and don’ts.

Try several of these to find the one that’s right for you. Regardless of which you choose, do not ignore social sharing. It is one more way to increase site traffic, reach, and exposure within social networks.