Short links are popular. You’ve likely seen them, such as in the form of a bit.ly, though there are plenty of other services. The benefits to using short links are more than just saving a few characters on a link, however. They provide tremendous value in measuring the performance of an ad campaign, especially on Twitter. How did I realize this? By experiencing it.

A few years back I was running an ad campaign on Twitter. The campaign was experiencing a high number of clicks as reported by Twitter — thousands of clicks, actually. However, our site analytics produced a much different picture: only a few hundred clicks were coming from Twitter. At the time, we were using UTM-tagged links in our tweets so we could tell how many people visited our site. But we weren’t able to see who was actually clicking, other than what was reported by Twitter.

However, our site analytics produced a much different picture: only a few hundred clicks were coming from Twitter.

Because of the disparity between Twitter and our site analytics, we decided to use short links —bit.ly, in our case — for all of our Twitter ads. We thought this would show us how many people clicked, and then we would know how many people were interacting us. It turns out our hunch was correct: Our site was seeing only a fraction of the visits that the Twitter system was reporting.

It turns out that, at the time, Twitter counted any click on a tweet. Favorite a tweet? That’s a click. Clicking on a picture to expand it? That’s a click. Expanding a tweet to see more? That’s a click. What we learned was that people were engaging with our tweets, but not with our site. So we finally had an answer to the huge disparity between the clicks reported by Twitter versus the visits reported by Google Analytics — all thanks to short links.

In other words, you must check all your platforms — ads, analytics, and the short link services — and check them often. Had we looked only in Google Analytics, we would have seen poor results and stopped the campaign. But if we had looked just in the Twitter platform, we would’ve seen fantastic results and kept the campaign going.

This is where short links come into play, a sort of tiebreaker for this scenario. When we look at the short link data, we’re able to see who actually clicked on the link and how he engaged with the site. We can then make a more informed decision.

Given that our Twitter campaign was focused on site engagement, we did end up pausing it. However, if it weren’t for the data from the short link services, we wouldn’t have been able to come to that conclusion so quickly.

How to Create a Short Link in Bit.ly

To create a short link, let’s first look at Bit.ly, the most popular link-shortening service. Creating a bit.ly is easy.

To get started, visit http://bit.ly and register for an account. This is the most critical step; not doing this prevents you from easily seeing your data. 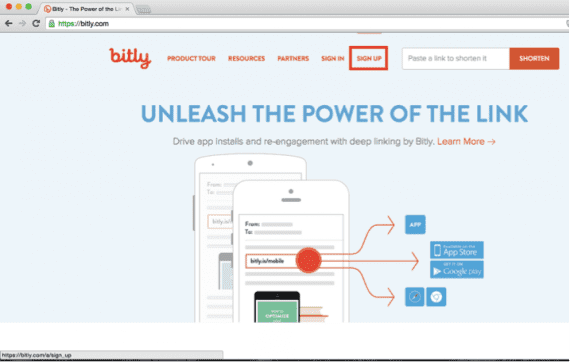 To get started, visit http://bit.ly and register for an account.

Next, let’s take a standard link (http://test.com) and shorten it. You’ll see that we have many customization options, including even changing what appears after the “bit.ly.” Let’s keep it simple and leave everything as is. (Need to shorten more than one version of the same link on your account? Just add “?” to the end of the link.)

Pasting a standard link (http://test.com) into Bit.ly produces the shortened URL, in red text on the right.

And that’s it. We’re done. When you share the link and people click on it, you’ll see it reported in this dashboard on Bit.ly. 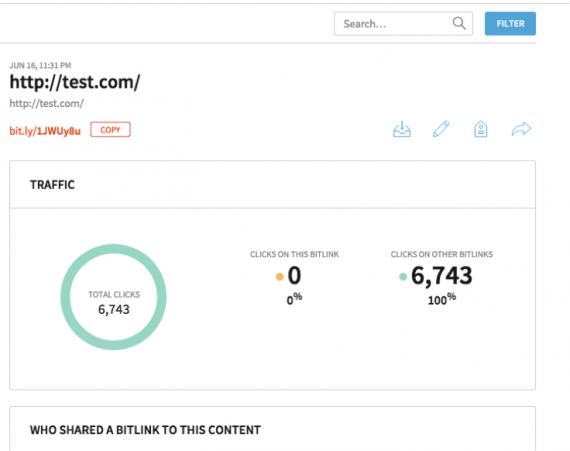 The Goo.gl URL shortener is another useful, but less used, tool. To create a short link in Goo.gl, first go to that site and — as long as you have a Google account and you’re signed-in, to make it easy to see the data – you’re ready to shorten your URLs.

First, paste the link you want to shorten.

Paste the link you want to shorten into Goo.gl.

Then, click “Shorten URL” to produce a short link to the right.

The shortened URL appears to the right, in blue text.

To view the data, just visit goo.gl anytime under the account you used to create the link, and you’ll be able to see its performance stats. (It’s important to note that anyone can see your click stats using this tool. If you want to keep this information confidential, use Bit.ly.) 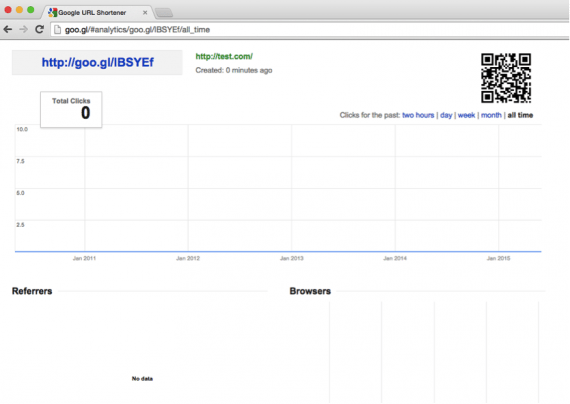 Goo.gl reports the number of clicks each shortened URL receives.

In summary, short links are simple to use, but they pack many useful features that you should be using. Are you using short links to track performance? Do you have short link suggestions? Please let me know, below.