You cannot buy real Fans and followers. The practice of purchasing Twitter followers and Facebook Fans is called “cherry blossoming.” It will not improve an online store’s business and could destroy a merchant’s reputation.

Social media marketing has become a requirement for many retailers. At least some marketing departments are now measured on the number of new Fans and followers added weekly. The thinking is that large numbers of Fans and followers mean that there is some consumer consensus behind a retailer and, therefore, other shoppers will feel more comfortable making a purchase or following the merchant themselves.

This may be true. But be careful to avoid the temptation to buy followers and Fans.

It was just August 2011 when a former staffer for Republican Presidential candidate Newt Gingrich told reporters that the politician’s staff had bought Twitter clout.

“About 80 percent of [the Twitter accounts of Gingrich followers] are inactive or are dummy accounts created by various ‘follow agencies,’ another 10 percent are real people who are part of a network of folks who follow others back and are paying for followers themselves (Newt’s profile just happens to be a part of these networks because he uses them, although he doesn’t follow back), and the remaining 10 percent may, in fact, be real, sentient people who happen to like Newt Gingrich,” the anonymous former staffer reportedly told Gawker just days after the Gingrich campaign had pointed out to the media that it had nearly three times as many Twitter followers as other Republican candidates.

The fake followers were, perhaps, not much more than a speed bump to a presidential candidate. But this sort of revelation could have a great impact on a retailer’s reputation.

Part of the temptation is that buying love — in the form of Fans and followers — seems both easy and cheap.

As an example, a multi-channel retailer recently added about 400 new Facebook Fans via a relatively large-scale promotion. The retailer offered up several $50 gifts for randomly selected Facebook Fans and used several channels, including a huge opt-in email list acquired over several years, to let potential customers in its demographic about the Facebook contest. The effort took money, time, and employee resources. 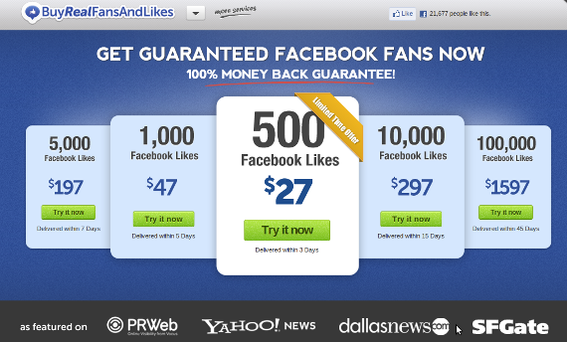 “Our mission is to offer our clients the best service available on the web in delivering Facebook Likes and Fans,” the company’s site says. “We believe in providing our clients with the quality service of genuine Facebook Fans to further enforce their social proof, enhance their visibility, online credibility and presence. We hold our values dearly and we believe them to be true.”

The company also has several other sites including BuyRealYouTubeViews and BuyRealTwitterFollowers.

Similarly, Get Fans Fast promises to deliver 1,000 Facebook Fans in seven days for $67. 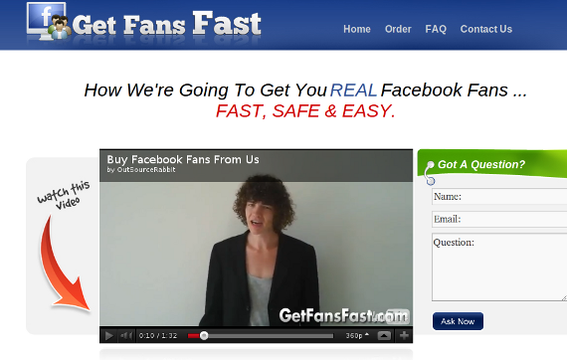 A Whole Lot of Nothing

Companies that purchase Fans and followers really get a whole lot of nothing. The reason that social media marketing has been successful is that it puts the real power to engage in the customer’s hands. Yes, merchants can be authentic and give customers reasons to engage, but the control really belongs with the consumers.

This consumer ownership means that followers and Fans are genuinely interested. This genuine interest, in turn, means that social media can — you guessed it — genuinely influence potential customers. It is all about real relationships.

If social media is like a cocktail party — as the analogy often goes — all that you’ve done is filled the room with cardboard cutouts.

Recently, The New York Times called attention to the practice of paying incentives for product reviews. Although many other publications and blogs have noted the practice for years, few of these have The Times’ reach. Seeing this practice in plan daylight should give ecommerce marketers pause, and remind them to focus on authentic customer communications that come from real values. Don’t just try to convince people you have great customer service, actually provide great customer service, as an example.

This lesson applies to social media marketing too. Perception — in spite of the oft-quoted saying — is not reality. And the perception that a company has lots of Fans and followers is nothing like actually having customer relationships.