Starting a digital direct-to-consumer brand has never been easier. But growing that brand into a successful business may have become more difficult.

All of the tools are in place. Contract manufacturers worldwide are happy to build, blend, or sew products for a DTC company. Ecommerce platforms such as Shopify, BigCommerce, Miva, and many others make it relatively simple to launch an ecommerce website. Thanks to consumer tracking, advertising on Google and Facebook has made it relatively easy to acquire new customers.

As competition increases and markets mature, however, these tools may not be enough to scale businesses to millions of dollars in revenue without adding sales channels.

The suggestion that DTC brands are easy to start but difficult to scale depends on one’s definition of success.

A modest goal of supporting a solo entrepreneur or small business is doable for many nascent DTC businesses.

But the challenge is greater for brands seeking size and global impact. Take Warby Parker, for example. Its mission statement is “to inspire and impact the world with vision, purpose, and style.”

The company wants “to demonstrate that a business can scale, be profitable, and do good in the world — without charging a premium for it.” 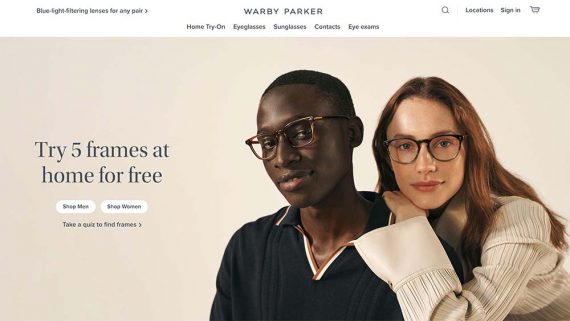 Warby Parker is among the most recognizable digital-native brands in the U.S. The company has expanded to physical stores as it seeks continued growth.

The company was among the first digital-native DTC brands. It benefited from a combination of digital tools, relatively little competition, and low-cost advertising platforms, according to Leonard A. Schlesinger, a professor at Harvard Business School.

“The internet democratized the tools required to start and scale a business,” wrote Schlesinger in a March 2020 article for the Harvard Business Review.

“The direct-to-consumer startups’ rise was enabled by an environment of abundant venture capital, low competition, and above all, the advertising arbitrage that could be exploited on under-priced social media platforms.”

“Fast forward to today, and many of those businesses are looking less viable than they once were,” Schlesinger wrote. “The landscape is almost unrecognizable from even a decade ago. For one, competitors have flooded in, spurred by the early success of a few standout brands. This has driven up the price of social media ads, eliminating any arbitrage and making the customer acquisition math that much more challenging.”

One of the chief challenges Schlesinger describes is competition. And many in the industry agree.

“Extremely low barriers to entry combined with the rising tide of ecommerce spending has made the DTC space very crowded,” said Andrew Lipsman, principal analyst for eMarketer, according to a report in Co, the U.S. Chamber of Commerce’s journal. “Many DTC brands today look the same and sound the same.”

They also tend to market in the same ways, which leads to Schlesinger’s point about advertising.

For DTC brands, there are at least two forces that impact digital advertising: demand and privacy.

Consider that in the second quarter of 2021, Shopify — perhaps the most popular ecommerce platform for small and mid-sized DTC brands — enjoyed subscription revenue of $334.2 million, a 70% year-over-year increase thanks to many more merchants launching online stores.

Many of these new stores will advertise on Google and Facebook, increasing demand. In fact, according to Revealbot, an automation platform for Facebook ads, the average cost per thousand (CPM) impressions on Facebook has risen from $8.67 in mid-December 2019 to $13.37 during the week of September 13, 2021. Facebook CPMs were as high as $20.76 during the 2020 Christmas season.

For some time, DTC brands and other online sellers have depended on targeted advertising to acquire customers. Those targeted ads relied on a complicated and far-reaching combination of tracking tools that directly associated a person’s behavior with his or her identity. In response, some tech companies, legislators, and shoppers have been working to reduce or end individual tracking.

More competition and the likelihood of increased customer acquisition costs could make it relatively more difficult to scale a digital DTC brand in 2021 than it was just a few years ago. But these forces do not make it impossible, nor do they mean that DTC is in danger as a segment.

Rather these digital brands may need to add new sales channels, new customer acquisition channels, and new and innovative ways to sell.

“Given how much things have changed, what has worked in the past almost certainly won’t work in the future. The path forward must include both a return to management fundamentals and a move beyond the existing DTC playbook in order to incorporate the learnings of the last decade,” wrote Schlesinger.

Warby Parker launched in 2010 as an entirely digital brand. It now has nearly 120 physical stores in the United States.