After all the recent news about Amazon’s successes and expansion — 2017 Prime Day and the planned acquisition of Whole Foods — the company’s second quarter financial results, for the period ending June 30, let a bit of air out of the balloon.

While revenue for the quarter was up 25 percent over the same period last year — higher than forecast — profit missed Wall Street’s expectations. Amazon’s increased expenses were responsible for the 51 percent decline in operating income, from $1.29 billion for Q2 2016 to $628 million in Q2 2017.

After some initial skittishness, Wall Street again embraced Amazon’s strategy of robust spending to maintain revenue growth. The year-over-year share price is up roughly 30 percent, to nearly $1,000, at time of writing.

Amazon Web Services, the cloud-computing provider, was a bright spot, contributing an increasing percentage of revenue and profit because its gross margins are higher than other business segments. Amazon Web Services is the company’s main growth driver, growing 42 percent over the same quarter last year.

In its guidance for next quarter, Amazon is giving a very broad range, predicting operating income between a $400 million loss and a $300 million profit.

Last week Amazon announced a new returns policy that lets customers return products purchased from marketplace sellers who are not part of the FBA program — without contacting the sellers. The policy also includes a “returnless refunds” feature that makes certain products that are expensive to ship eligible for refunds without being returned by customers. This is an opt-in program for sellers; they do not have to adopt it. The program is set to start on October 2. Seller reaction has been overwhelmingly negative, especially to the returnless refunds policy, which sellers see as a boon for scammers.

In an ironic twist for a company that used to be known for its catalog sales (the ecommerce of its time), Sears announced that it will be selling its Kenmore appliances on Amazon. Kenmore was once a top appliance brand with a 27 percent market share in 2003. Sears’ physical footprint in the U.S. has shrunk from 3,400 stores in 2007 to just 1,400 stores now.

Kenmore’s smart air conditioners are already on sale on Amazon and are eligible for free shipping. They can be synced with Alexa, Amazon’s voice assistant. The Kenmore appliances will also be shipped for free.

In an effort to expand its online ordering program with pickup at local stores, Walmart announced in July that it was expanding its pickup towers to 100 more stores, adding to the 20 that already exist. The program appears to be a hit with consumers and Walmart is trying to expand the program quickly before Amazon starts its brick-and-mortar distribution system from the Whole Foods chain it recently announced it would acquire.

Customers who place an in-store pickup order online receive an order number and digital receipt. At the store they input the code into Walmart’s kiosk machine to retrieve their package. The code can also be scanned from a customer’s smartphone. Within 45 seconds, the item is dispensed on a conveyor belt through a door in the machine. Mark Ibbotson, executive vice president of central operations for Walmart U.S., said the Pickup Tower is “much like a high-tech vending machine.” 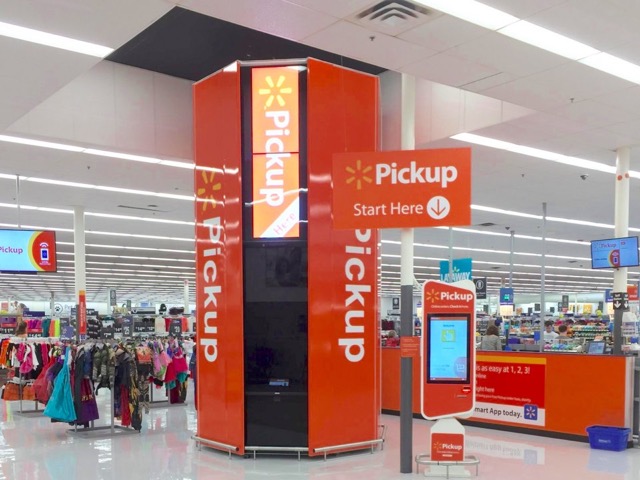 Walmart announced in July that it was expanding its pickup towers to 100 more stores, adding to the 20 that already exist. Customers who place an in-store pickup order online receive an order number and digital receipt. Image: Walmart.

Walmart is enticing customers by offering a pickup discount. Originally limited to 10,000 items, the discount is now available on almost a million items, according to Jeff Lore, president and C.E.O. of Walmart eCommerce. Discounts vary by product as the company essentially passes on savings from not having to ship products to the customer. A flat screen terlevision reportedly comes with a $50 discount.

Walmart also offers pickup services for groceries ordered and paid for online, within four hours of the order. The retailer has equipped 800 stores with same-day pickup service for online grocery orders and is testing a 24-hour automated grocery pickup kiosk at a store in Oklahoma.

Store employees transfer the groceries to customers’ cars in a designated area of the parking lot. The 20-by-80-foot kiosk contains up to 30,000 products, including frozen and refrigerated items. Fifty-five percent of Walmart’s $300 billion annual revenue in the United States comes from groceries.