In “Ecommerce Briefs,” I address news and developments that impact online merchants. In this installment, I’ll report on Amazon’s expansion into shipping and logistics; the success of the returns partnership between Amazon and Kohl’s; and where teenagers like to shop.

According to TJI Research, Amazon is expanding its shipping and logistics services. With Amazon Shipping, sellers who are invited by Amazon can print shipping labels using their existing Amazon tools and dashboards. Sellers can then ship from their warehouses directly to customers, not through Amazon’s fulfillment centers.

Amazon will pick up packages from sellers’ warehouses every weekday and deliver them to Amazon customers seven days a week. Amazon Shipping is currently operational for invited sellers with warehouses in the greater Los Angeles, Chicago, New York, and New Jersey areas.

Amazon has reportedly told these sellers that it can reach most U.S. destinations via ground within five calendar days. This timeframe means that Amazon Shipping is not being used for most Prime orders. However, Amazon Shipping is equipped to fulfill Seller Fulfilled Prime shipments to customers who live within a 2-day ground-shipping radius from participating seller warehouses.

This new service is an incremental measure in Amazon’s effort to enhance its logistics. The objective is to reduce sellers’ reliance on third-party providers such as UPS and FedEx. Currently, Amazon delivers about 10 percent of its own orders, according to data from solutions-provider ShipMatrix. The U.S. Postal Service handles about 62 percent of Amazon’s orders; UPS delivers between 21 and 26 percent; and FedEx is about 8 to 10 percent, according to ShipMatrix. I’ve addressed the competition among delivery and logistics providers, and this latest move seems to be an escalation in Amazon’s attempt to diminish third-party involvement.

Amazon has not commented on this new initiative other than to state that it is always experimenting with new ways to deliver orders to customers more quickly.

When Kohl’s announced in late 2017 that it was partnering with Amazon to accept returns in 82 of its Los Angeles and Chicago retail stores, it received a skeptical reception. Now it looks like the decision was a good one. Earlier this month Earnest Research published the results of its study of Kohl’s Chicago-area retail stores.

Earnest Research compared various metrics from 2017 (before the collaboration) with 2018 results for Chicago stores and the rest of the United States. It found that revenue growth for Kohl’s Chicago locations was more than 10 percent in 2018, compared with 5 percent elsewhere in the country. The number of transactions increased 6 percent in Chicago versus a 2-percent decline elsewhere. The acquisition of new customers in the Chicago area rose 9 percent in 2018 in contrast to 1 percent in the rest of the country. 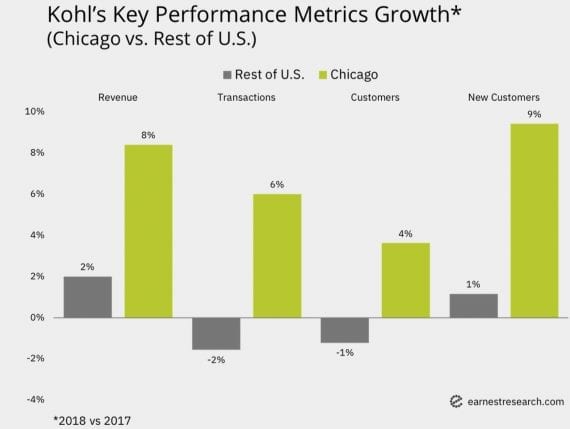 Revenue growth for Kohl’s Chicago locations was more than 10 percent in 2018, compared with 5 percent elsewhere in the country. The number of transactions increased 6 percent in Chicago versus a 2-percent decline elsewhere. The acquisition of new customers in the Chicago area rose 9 percent in 2018 in contrast to 1 percent in the rest of the country. Source: Earnest Research.

Kohl’s was betting that people who returned Amazon items in its stores would stay and shop and the results seem to confirm this.

Kohl’s expanded the return locations in August 2018 from 82 stores to just over 100 (out of 1,158 nationwide stores), with plans to expand even more. However, Amazon announced that it will close all of its 87 pop-up kiosks located in Kohl’s, malls, and Whole Foods by the end of this month.

Amazon tops the list for favorite shopping sites, with 50 percent of teens saying it is their preferred shopping site — up from 44 percent last spring. Nike came in a distant second at 5 percent. Overall teen spending increased 6 percent from fall 2018 and 1 percent from a year ago.