“Ecommerce Briefs” is an occasional series wherein I review news and developments that impact online merchants. In this installment, I’ll address final holiday sales figures, a change in brick-and-mortar location trends, and 2019 predictions.

Adobe Analytics issued its final year-end ecommerce holiday sales results. It reports an overall increase of 16.5 percent over 2017. Average sales per day from Nov. 1 through Dec. 25 were $2.1 billion, an increase from $1.8 billion in 2017. Average overall value per transaction was $131.71.

Smartphones handled half the traffic for the first time and comprised 31 percent of total sales, with 34-percent year-over-year growth. However, smartphone cart-to-order conversions occurred 30 percent less frequently than desktop conversions. On Christmas Day 61 percent of visits and 42 percent of revenue came from smartphones.

The period between Thanksgiving Day and Cyber Monday generated 19.2 percent of total holiday revenue. In total, that five-day period accounted for $24.2 billion in sales, a 23 percent increase over last year. Thanksgiving, Black Friday, and Cyber Monday all broke sales records.

The rapid growth between Thanksgiving Day and Cyber Monday helped merchants attain the $100 billion sales level 11 days earlier this season than in 2017. Sales continued to grow until eight days before Christmas when they tailed off. Every day from November 1 through December 21 exceeded $1 billion in sales.

Macy’s disclosed earlier this month that its 2018 holiday sales were lower than expected. The retailer attributed the drop to mid-December sales weakness, but could not account for the reason. The chain disclosed that its same-store sales during November and December were up just 1.1 percent.

Kohl’s, which had been having a very good 2018, stalled during the holiday season. It reported comparable sales growth of only 1.2 percent during the final two months of 2018, down from 6.9 percent in 2017. The company also announced that it would close four poorly performing stores and offer a voluntary retirement program companywide to workers 55 and older with at least 15 years of experience.

Nordstrom announced that comparable sales for the three months ending on January 5 rose just 0.3 percent from the same period last year due, partially, to less foot traffic. However, sales at its discount stores (Nordstrom Rack) rose 3.9 percent, owing to 18 percent growth in online transactions. Year-to-date sales at its full-price stores were below previous forecasts.

Chico’s FAS, the women’s apparel conglomerate that owns Chico’s, White House Black Market, and Soma, announced this month that it would close 250 stores over the next three years. The company operates about 1,400 stores in the U.S. and Canada.

Brick-and-mortar retailers are struggling to find the right omnichannel sales strategies. Midtown Manhattan — especially Fifth and Madison Avenues — used to be the most sought after retail locations for chains and brands. Now companies are rethinking the value of these high-cost venues.

Ralph Lauren, Lord & Taylor, and Henri Bendel have already given up their spaces. Henri Bendel has gone out of business altogether. Calvin Klein announced earlier this month that it would close its Madison Avenue store in the spring. The Gap is closing its Fifth Avenue store in January and Versace announced that it would also leave its Fifth Avenue location. 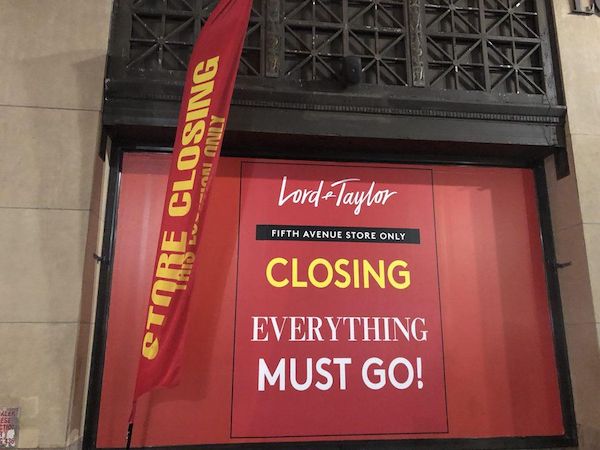 Amazon opened its newest store concept, Amazon 4-star, in SoHo in September. It carries only its best-selling online products. It’s likely that some of the brands that are fleeing Midtown will open smaller format stores in lower Manhattan as well. Retailers and brands presumably want a Manhattan presence because the area attracts high-income New Yorkers and visiting tourists.

Research firm eMarketer predicts that total retail sales for all of 2019 will grow 3.3 percent to $5.5 trillion and ecommerce sales for the entire year will grow 15.1 percent to $605.3 billion. One caveat: Volatile risk factors such as trade tariffs and the government shutdown could diminish the outlook.