If Google Trends is any indication, interest in 360-product photography peaked more than 15 years ago. The idea then (and now) is to replicate the brick-and-mortar environment where customers can see and handle a given item. 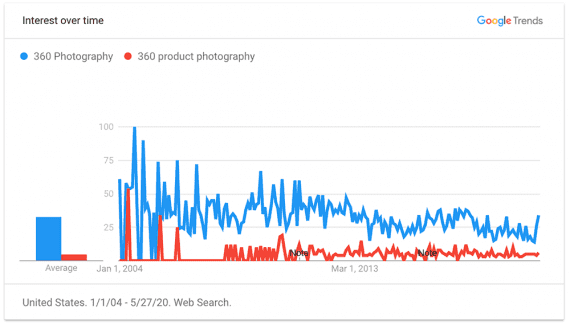 A 360-degree product image that a shopper can drag left, right, up, and down with either a mouse pointer or a fingertip (on a mobile device) provides a somewhat better view. What’s more, at least some ecommerce businesses claim that 360-degree product photography boosts conversions.

“In the last ten years, we saw reports suggesting from 5 percent to 40 percent increase in sales with the adoption of 360 product views,” said Dimitri Bir, founder of Webrotate 360, which makes 360-degree product image software.

“The broad range is not surprising as [360-degree product photography] works differently for various industries in different markets. For our customers, we like to refer them to the actual scientific research that gives us a more specific and likely more realistic number for an average ecommerce store, which suggests a possible 14-percent increase in sales and 17-percent better shopping experience when 360 product views are available.”

Other sources offered a broad range of conversion results when asked for real examples of how 360-degree product photography had impacted ecommerce sales.

For example, Igor Varyvoda, a digital strategist at Sirv, an image content delivery network, pointed to published reports, saying that True Value had seen conversion rates rise 22 percent when 360-degree photography was added to a product detail page and that The Home Depot saw a 35-percent reduction in product returns during an A/B test of 360-degree product photos.

Spinning or rotating 360-degree product photos are not widely used across ecommerce websites. Perhaps it’s because 360-degree images are less familiar to ecommerce marketers or, maybe, there is a misconception that 360-degree photography is expensive.

Thus it might be instructive to think about the sorts of sites that are using these images.

Furniture retailer Ethan Allen uses 360-degree product photos for many of the sofas it sells online.

Marketplaces. Let’s start with Amazon and Walmart. These two retail marketplaces allow third-party sellers to add 360-degree photography, and, in some cases, may add it to their own retail listings. 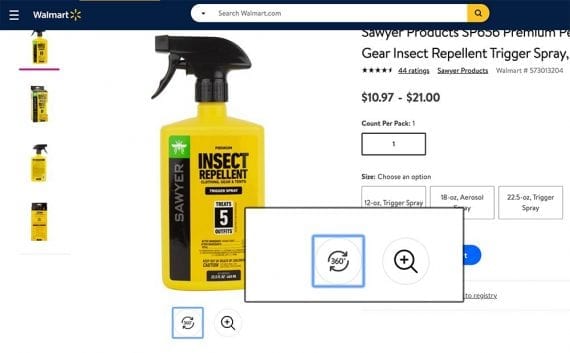 Sawyer Products, makers of insect repellent, include a 360-degree animation on Walmart’s site.

Direct-to-consumer sellers often face significant competition on these marketplaces. In such an environment, nearly any competitive advantage can make a meaningful difference in sales. Perhaps that is why companies such as Delta Faucets and Sawyer Products (above) use 360-degree product photos on these marketplaces. 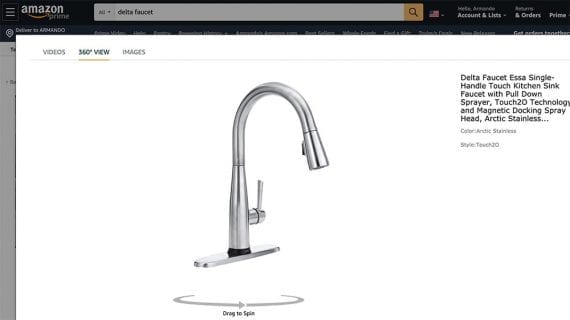 Sofa sellers. Several online furniture stores use 360-degree product photography, especially for sofas. This was the case for Ethan Allen and Heal’s (a U.K.-based DTC seller) at the time of writing, as examples.

Consumers typically want to view furniture from all angles. If a sofa, for example, is to be a room divider, consumers likely want to see how it looks from the back and the side. 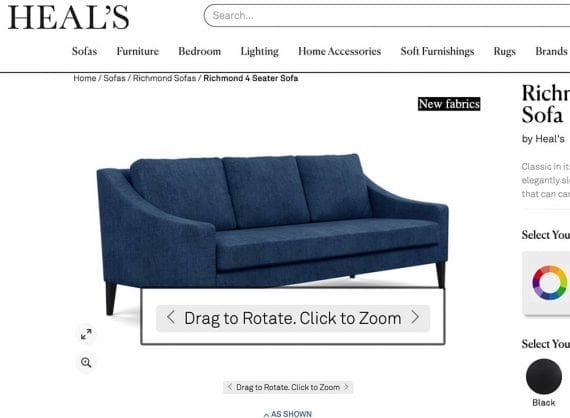 Heal’s includes a 360-degree product photo animation for many of the sofas it sells online.

Purchasing agents are also consumers, and although they are buying for a business, they may still expect the same level of ecommerce sophistication as they experience on Amazon. 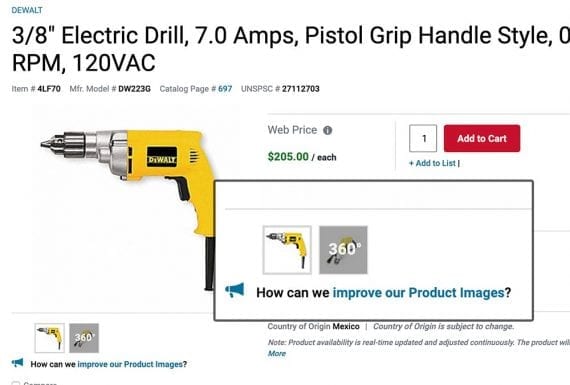 Grainger includes 360-degree product photography on some of the B2B products it offers online.

Auto marketplaces. Car dealers are relatively new to ecommerce. One might say that if ever there was a retail business that depended on a brick-and-mortar presence, it would be automobile sales.

However, even the automobile industry has been moving toward online sales. This has become especially true during the coronavirus pandemic.

For example, HomeNet Automotive, which offers software for vehicle inventory management and syndication to automobile marketplaces such as Autotrader and Facebook Marketplace, has been touting its 360-degree photography service, called SnapLot 360, as a way to stand out and boost sales during pandemic-related shutdowns.

The benefits, however, are likely to last well beyond Covid-19. Many if not most vehicle shoppers start their searches online. In a crowded online marketplace, 360-degree views can provide a competitive advantage.

There are alternatives to 360-degree images. For example, a good product video may work as well or better than a 360-degree image in some instances. Or several photos of a product from various angles could provide many of the same views as a 360-degree animation.

In the end, merchants may want to test 360-degree product photos when looking for ways to boost conversions.