When your marketing plan requires newsletter signups, event registrations, and resource downloads, Facebook lead ads may be a powerful tool at an attractive cost per acquisition.

Lead ads feature a mobile-first form already filled out with a Facebook or Instagram user’s name and contact information. The ads transform the registration or subscription path as less form friction results in more conversions.

Facebook lead ads have two parts: the ad and the form. The signup or registration is captured on the Facebook or Instagram platform. Registrants do not leave Facebook or Instagram to find and fill out a form. The form, again, is loaded with information from the user’s profile, eliminating the need to type in a name, phone number, or email address. 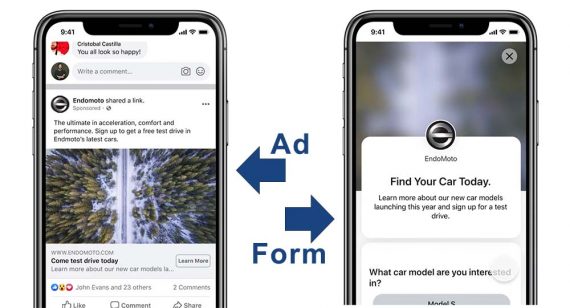 The ad is identical to any other Facebook ad. The difference is the form. It even includes a familiar call to action, such as “learn more” or “sign up.”

Keeping the registration on Facebook or Instagram is, for many, a better form experience. Facebook presumably prefers this, too, since the user is not required to leave one of its networks.

I have been a fan of this ad form for some time, but recently I tested it for a software-as-a-service company.

The test was aimed at two educational offers: a four-week course with live sessions and an unrelated, weekly live workshop.

The offers deployed two types of Facebook ads: one linked to an offsite landing page, and the other used an on-site lead form. Both groups used identical audiences and ad assets. The test ran for six weeks and garnered thousands of registrations.

The results were not even close.

What’s more, in both cases the CPA dropped over time, presumably as the algorithm improved targeting.

Registrations from lead ads were not perfect. The information loaded into the form comes from a person’s profile on Facebook or Instagram.

I observed a couple of problems with this.

First, some Instagram registrants did not have a real name in their profile, resulting in monikers similar to “Mrs. Magic Woman” in the lead form. This did not necessarily reduce the quality of the lead, but it didn’t help, either.

The second issue was more troublesome. Follow-up emails sent to registrants from lead ads had relatively fewer clicks and engagements.

Moreover, the email address in a Facebook or Instagram profile is likely personal versus business, making it less desirable for a B2B SaaS company.

Nonetheless, the lead ad performed much better than the landing page version.

Another challenge with using Facebook lead ads has to do with collection and automation. How does an advertiser get the leads created on Facebook? How are those leads added to marketing automation campaigns?

The SaaS company had two existing automated campaigns: one for the courses and one for the workshops.

Our solution was Zapier, which has integrations for Facebook lead ads and several popular form providers. A registration captured on Facebook or Instagram was automatically added via Zapier to the existing automated follow-up.

Other, more burdensome solutions include employing an application programming interface or manually downloading the leads.

A simple Zapier integration can transfer the leads from Facebook to a marketing automation platform.