Focus and passion are the keys to long-term success for omnichannel and ecommerce retailers.

In his 2001 book “Good to Great,” author and researcher Jim Collins sought to explain “why some companies make the leap [from good to great] and others don’t.” His answer plays out over about 300 pages, and it includes the Hedgehog Concept.

“In the famous essay ‘The Hedgehog and the Fox,’ Isaiah Berlin divided the world into hedgehogs and foxes, based upon an ancient Greek parable: ‘The fox knows many things, but the hedgehog knows one big thing,” explained Collins in the opening of chapter six of his book.

“The fox is a cunning creature, able to devise a myriad of complex strategies for sneak attacks upon the hedgehog. Day in and day out, the fox circles around the hedgehog’s den, waiting for the perfect moment to pounce. Fast, sleek, beautiful, fleet of foot, and crafty — the fox looks like the sure winner. The hedgehog, on the other hand, is a dowdier creature, looking like a genetic mix-up between a porcupine and a small armadillo. He waddles along, going about his simple day, searching for lunch and taking care of his home,” wrote Collins.

“The fox waits in cunning silence at the juncture in the trail. The hedgehog, minding his own business, wanders right into the path of the fox,” Collins continued. “‘Aha, I’ve got you now!’ thinks the fox. He leaps out, bounding across the ground, lightning-fast. The little hedgehog, sensing danger, looks up and thinks, ‘Here we go again. Will he ever learn? Rolling up into a perfect little ball, the hedgehog becomes a sphere of sharp spikes, pointing outward in all directions. The fox, bounding toward his prey, sees the hedgehog defense and calls off the attack.”

Now imagine an austere conference room at a mid-sized retail company. The business’s leaders have gathered to discuss how Covid-19 has impacted the company, what the upcoming election might do to its business, and what they must do next.

There are several discussions. Ideas fly about. Some want to mimic the competition. Others believe new technology is the answer. Still others suggest hiring or firing workers. Each person argues for her position, giving good reasons for their approach until no one is sure what the company should do.

The problem in this scenario may be that there are too many foxes and not enough hedgehogs.

“Foxes,” Collins wrote, “pursue many ends at the same time and see the world in all its complexity…Hedgehogs, on the other hand, simplify a complex world into a single organizing idea, a basic principle or concept that unifies and guides everything. It doesn’t matter how complex the world, a hedgehog reduces all challenges and dilemmas to simple…hedgehog ideas.”

According to Collins, “Those who built the good-to-great companies were, to one degree or another, hedgehogs. They used their hedgehog nature to drive toward what became known as a Hedgehog Concept for their companies. Those who led the comparison companies [which failed to become great] tended to be foxes, never gaining the clarifying advantage of a Hedgehog Concept, being instead scattered, diffused, and inconsistent.”

As merchants struggle to deal with the many and various challenges 2020 has brought, it may make sense to try to simplify the complex.

In “Good to Great,” Collins does not tell readers what their particular Hedgehog Concept should be but, instead, suggests looking at the overlap of three circles or dimensions. 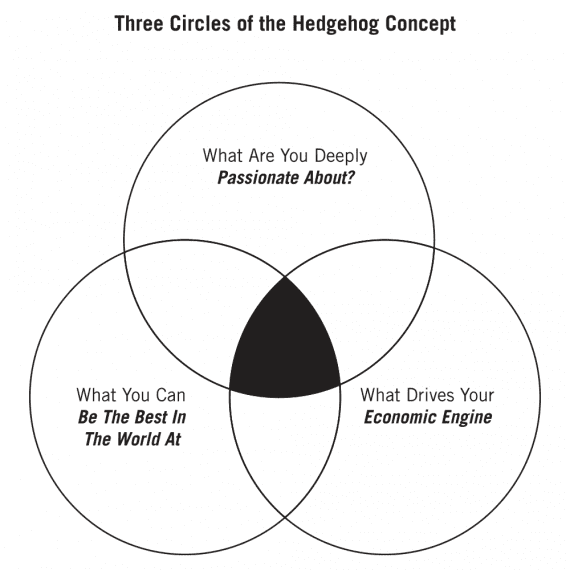 Collins creates a Venn diagram for the Hedgehog Concept. The simple, clarifying hedgehog idea is at the intersection of the three circles or dimensions. Image: Jim Collins.

These dimensions are questions a company can ask of itself to develop a simple and clear business strategy.

Context is important here. Collins is speaking directly to business leaders who want to build great companies and outperform the competition.

Competence is not enough in itself. If the business is not passionate, it will not sustain the energy and drive needed. Similarly, if the thing a business is passionate about and good at does not generate profit, it will not be great.

When a business can identify its Hedgehog Concept, it has one of the ingredients of a future, great company. It has a simple and understandable strategy that will guide it through hard decisions. This is true even in a year like 2020, even in the middle of a global pandemic, and even in the face of political uncertainty.