Get Ready for a Marketplace Bloodbath

As the retail industry continues its digital transformation, consumer brands and traditional retailers are churning out Amazon-like marketplaces that could lead to new battles over products and customers.

On June 8, 2021, Oriental Trading Company, Inc., a discount party-supply chain, announced that it would become the most recent (at the time of writing) traditional U.S. retailer to launch an online marketplace.

“Our company’s vision is about making life more fun, and that’s exactly what we’re building for our customers with this new solution. By creating this robust marketplace, customers can easily get everything they need, at the prices they want and in one place,” said Steve Mendlik, the Oriental Trading Company’s president and CEO. 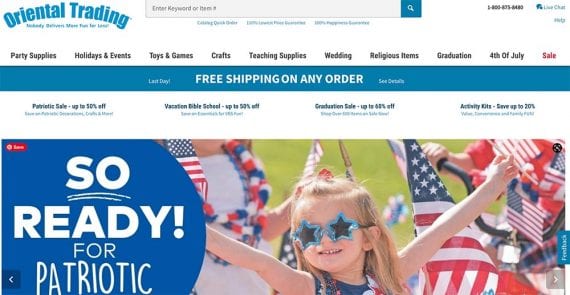 Oriental Trading Company will soon launch a new marketplace. But even in its niche segment, there will be competition.

Retailers such as Oriental Trading Company face competition from all sides. Many retailers and direct-to-consumer brands believe marketplaces are a path forward.

“Let’s start with the model that doesn’t work,” said Bloomreach CEO Raj De Datta, who is the author of the book “The Digital Seeker: A Guide for Digital Teams to Build Winning Experiences.”

“What doesn’t work anymore is ‘I’m a retailer. I’ve got a certain level of selection. I source all my products. I work with all my brands. I deal with the supply chain. I open a bunch of brick-and-mortar stores for my distribution. I market online and offline. I’m dependent on the number of people that walk into my store and buy the product that I bought from someone else and mark it up a bit to cover my margin and call it a day.’

“That model of retail, which has existed for a hundred years, is gone,” said De Datta, who was speaking at a live event for CommerceCo by Practical Ecommerce.

So what’s the future for these companies? De Datta suggested finding a specialty niche, developing DTC brands, or becoming a marketplace.

“This third opinion, becoming a marketplace, is only possible for the biggest [brands] — a Target or a Walmart with incredible scale and wants to play the selection game,” De Datta said.

The selection game, as De Datta described it, has two parts.

First, marketplaces need a lot of products relative to the segment served.

Amazon has a total selection of roughly 350 million products. Of these, about 12 million are sold by Amazon, with the remainder coming from marketplace sellers, according to BigCommerce.

Second, marketplaces need an audience. Amazon has approximately 200,000 million Prime members. This audience and the rest of the shoppers who visit Amazon are essential to the company’s success.

Thus, as the number of retail marketplaces increases, competition for both products and people should also increase.

But what about Best Buy, 1-800-Flowers, Kroger, or Urban Outfitters? Each has launched a marketplace of some kind. What’s more, all use a marketplace platform called Mirakl. It’s to retail marketplaces what Shopify and BigCommerce are to merchant-based ecommerce. Mirakl helps retailers transform a well-stocked ecommerce site with a reasonable audience into a platform for third-party sellers.

However, the ease of starting a marketplace does not ensure success any more than a single ecommerce site.

On the one hand, this might not differ from competing for customers at a brick-and-mortar or online store. But on the other hand, marketplaces frequently include suppliers as direct sellers.

Think about all of the digital native DTC brands selling on Amazon. Attracting those sellers is much different than calling a distributor and buying products to place on a shelf. And imagine those brands suddenly able to list products on 10 or 20 marketplaces. They could be a lot more selective with their inventory, among other outcomes.

In short, marketplaces might be tempting for many companies. But competition will be stiff. It might even be a bloodbath.