In “3 Handy Google Ads Scripts to Automate Tasks,” I addressed methods to expedite pay-per-click management. But, in my experience, advertisers should cautiously embrace Google’s push to automate campaigns. The key is to find the right balance of automation and user control.

Bidding strategies are among the most common forms of automation. Google’s “Smart Bidding” process uses machine learning to optimize ad performance, via:

But there are steps advertisers can take for more control.

Google can estimate the performance of Target CPAs if you have enough historical data. 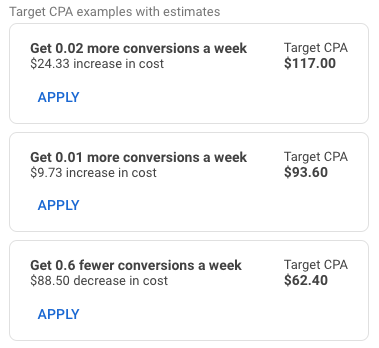 Google can estimate of performance for Target CPAs provided there is sufficient historical data.

Set maximum cost-per-click bid limits. With bidding strategies for Maximize Clicks and Target Impression Share, always set the highest cost per click you are willing to pay. It’s a requirement for Target Impression Share, but not for Maximize Clicks. Setting a max CPC helps to accrue more traffic. For example, if you set your max CPC to $2 for a $50 budget, you will garner at least 25 clicks. Otherwise, you may pay more per click and receive only 18, for example.

Choose the most impactful conversion actions. With any Smart Bidding strategy, optimize for top conversion actions. That is especially true for Maximize Conversions and Maximize Conversions Value. Both attract users who are most likely to convert. But neither allows for max CPC limits. A keyword with an average CPC of $5 could increase to $10 if Google deems the user more likely to convert. Potentially paying more for the click isn’t the problem. The key is to make sure you are optimizing around the right conversion(s) — for example, a user who purchases products versus one who signs up for a newsletter.

Review bid strategies often. Bid strategies change over time. A Target CPA for a campaign or ad group for one month could change the next. Advertisers often alternate between volume and efficiency. During Q4, for example, a high Target CPA may be desired. Come January, efficiency could be more important, necessitating a lower cost.

Similarly, the Smart Bidding metric could change. An advertiser could use the Maximize Clicks strategy initially to gain traffic and then switch to Target ROAS. Or, an advertiser could optimize for Maximize Conversions and then realize a higher Target Impression Share is more fruitful. In short, when it comes to automated bid strategies, never “set it and forget it.”