Kanban is a project management approach for nearly any step-by-step process to increase efficiency, reduce waste, and help a business improve.

Although Kanban was developed in the 1940s and 1950s to boost manufacturing efficiency at Toyota factories in Japan, the system has been adapted to many industries, including software development, publishing, and retail.

Kanban is particularly effective for continuous delivery workflows, such as content marketing and inventory management, since it can “pull” work through a process.

To understand how Kanban works, imagine a Toyota manufacturing plant in the 1950s that makes parts for automobiles.

Manufacturing processes at the time were focused on “pushing” parts through as quickly as possible. Machines were optimized to produce. Employees of the era may have been paid “piece work,” meaning their income depended on how many parts they made per hour.

Optimizing manufacturing output sounds like a good idea until you realize that not all auto parts have the same level of complexity or require the same amount of time to make. At one machine, a worker is stamping out 50 exhaust manifolds an hour. Another station, however, is only making five carburetors an hour.

How was it that whenever you walked into the local market the store seemed to be stocked? In Japan, perhaps, you were always able to find rice, seaweed paper, and fish. In the United States, the local grocer always had milk, eggs, and bread.

Toyota discovered that grocery stores used visual cues to “pull” inventory through the process rather than focusing on “push” units.

Imagine the egg cooler at your local supermarket. It probably has several dozen eggs organized into stacks by size and supplier.

When you pick up a carton, you create an empty spot on the stack. That space is a visual cue that inventory will need to be refilled.

Later a store employee sees the cue and retrieves eggs from a walk-in cooler at the back of the store. Perhaps it has been a good day and the store sold an entire box of eggs.

That evening, another store employee checks egg inventory and sees that there is an entire box gone. This employee orders another box of eggs to be delivered the next day.

A consumer’s egg purchase helped to pull eggs through the inventory process. This is just the opposite of what Toyota had been doing before Kanban. Instead of waiting for a customer to “pull” auto parts through the process, they were just making things. That would be like a grocery store employee stacking eggs to the ceiling regardless of sales.

Visual cues and “pulling” became an important part of Toyota’s lean manufacturing process and “just in time” approach to building cars. This approach has helped Toyota become the largest automaker in the world.

Toyota could not necessarily rely on a car salesman to restock, say, coupes. Rather it created a system of boards, production lanes (or lists), and cards. 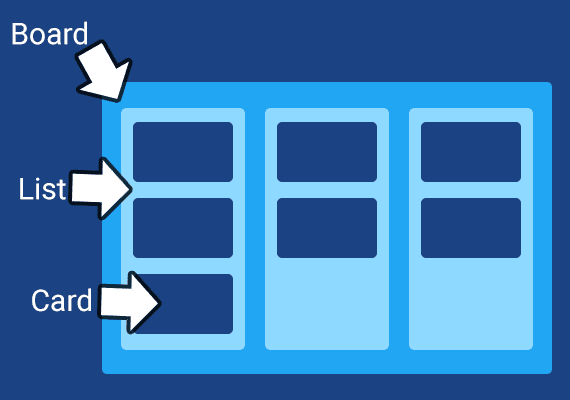 The Kanban system relies on boards, lists, and cards to provide a visual representation of the workflow. Lists on the right of the board pull cards from lists on the left.

At its most basic level, a Kanban board may have as few as three lists. These lists might be labeled “to do,” “doing,” “done” — or “task,” “in progress,” and “completed.” But the idea is that there are at least three statuses describing the three basic phases in which a task moves through.

A typical Kanban board for a marketing or business project should include several lists. For example, a marketing project might have lists for:

Cards are pulled from the left to the right through the workflow.

When a marketing specialist becomes available, she takes responsibility for the item at the top of the “Tasks” list and moves it to the “In progress” list. Once one of her cards has made the journey to “Done,” she starts again at “Tasks.”

Each Kanban card has all of the information a worker would need to complete a task and may even include sub-tasks in the form of a checklist.

Cards are also the place for collaboration, as several card “members” can exchange comments, make suggestions, or help complete checklists. 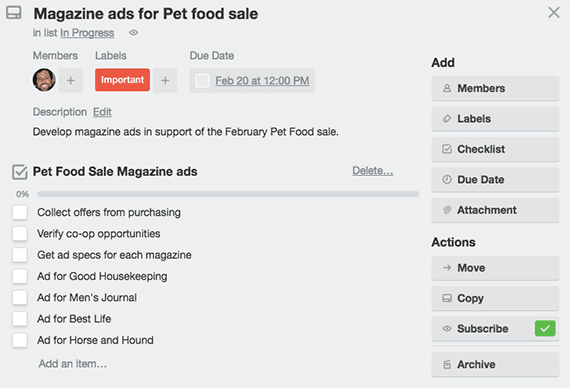 Kanban cards include all of the information a worker would need to work on a task or it will at least point them to other resources. It may also include sub-tasks in the form of a checklist or similar.

To cope with this complexity, a business will need to adopt some form of project and task management. The Kanban system is one approach. It may help organize these processes.