Social commerce in China combines content, chat, live streaming, and sharing with in-app retail purchases, obliterating the distinctions between social media networks and online stores. China’s style of ecommerce is so successful it could disrupt retail in the U.S. and Europe.

Social commerce is not clearly defined in the West, where it can describe everything from social media marketing to social selling. But in China, “social commerce” has come to represent a complete social-shopping experience that includes:

The social commerce experience “is like you are exploring an amusement park. It is chaotic. It is fun, and it is even a little bit addictive,” said Angela Wang, who is a senior analyst with the Boston Consulting Group and a corporate director for Chanel. 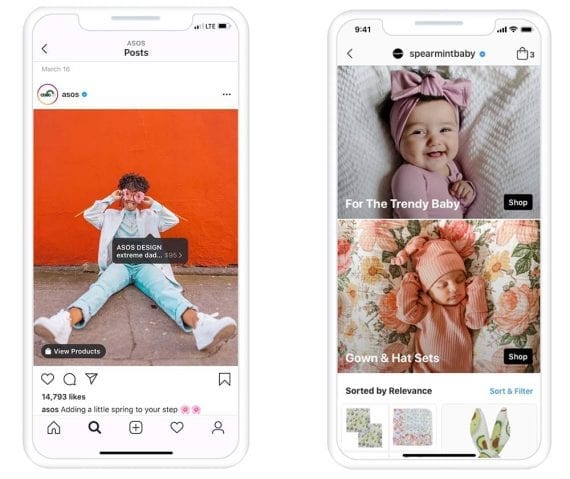 Some social media platforms, such as Instagram, shown here, are already including shops and payment processing in-app. This is essentially social commerce.

According to Wang, who presented a TED Talk on “How China is changing the future of shopping” in 2017, a social commerce experience on WeChat, for example, might go like this. A person, call him Fred, is chatting when a friend shares a link to a snack, perhaps a new flavor of chips. Fred clicks the link and sees a product page on WeChat. Fred buys the snack with WeChat Pay, scheduling it for delivery to his office the next morning.

After Fred completes the purchase, WeChat shows Fred an influencer’s live video stream, explaining how to use a gadget that is likely to interest Fred. Fred watches and clicks to add the product to his cart, making a second purchase before returning to the chat group to gossip about celebrities.

In written form, this example doesn’t quite read like visiting an amusement park. But on WeChat, the product page was likely colorful and fun, and the live stream could have been a mix of drama, physical comedy, and product pitching not often seen outside of Asia.

The bottom line is that China’s social commerce is incredibly successful.

“WeChat alone drove $250 billion in ecommerce in 2020. So it is massive. And for social commerce, many people expect the market to grow at a compound annual growth rate of 38 percent for the decade…which means it’s a channel we need to embrace,” said Joris Kroese, CEO of Hatch, a company that provides “where to buy” commerce solutions.

Kroese’s company has clients worldwide, including leading online retailers in 80 international markets and 2 million physical store locations. The nature of Hatch’s services means that the company sees the data underlying retail trends at scale. Thus it is telling that Hatch is working on “turnkey” social commerce solutions in 2021.

Consider, too, the influencer’s live video stream that was part of the social commerce experience Wang described in her TED Talk. These live streams may be more successful than you could imagine.

“I am so fascinated by people who don’t have context on the Chinese market, whether that’s live streaming or how much an influencer could sell,” said entrepreneur and author Gary Vaynerchuk during a 2020 interview.

“When I say things to people like, ‘An influencer sold $60 million worth of this one product on one live stream,’ an American businessperson’s brain breaks,” said Vaynerchuk.

Wang points out that some Chinese shoppers are enjoying their relatively new-found middle-class stature and want to have the latest and greatest products.

Other factors might include repeated product exposure, group or peer pressure in social buying situations, and amazing convenience — some grocery stores in China offer entire meal “baskets” for sale via social commerce and delivery in 30 minutes.

The list of reasons could go on. But I should mention at least two more factors: attention (addiction) and corporate infrastructure (trillion-dollar wars).

Social media sites are built to be sticky. They grab someone’s attention and keep it. It is an essential part of what they do. Facebook, Instagram, TikTok, Pinterest, and just about every other social media network uses algorithms designed to keep folks engrossed and, possibly, a bit addicted.

This need for attention is not necessarily good. Jaron Lanier, a computer scientist, has written a book about some of the problems associated with social media, “Ten Arguments for Deleting Your Social Media Accounts.” One of Lanier’s arguments against social media is that “you are losing your free will.”

Attention is so important that the largest companies in China have built it into their infrastructure.

During her presentation, the Boston Consulting Group’s Wang noted that mobile commerce (and by association social commerce) had risen rapidly in China in part because of corporate infrastructure.

“Two technology platforms, Alibaba and Tencent, own 90-percent of ecommerce, pretty much the whole market, 85-percent of social media, 85-percent of [the] internet payment [market]. They also own a large volume of digital content,” Wang said.

This combination makes it possible for China’s style of social commerce. If you want to sell grocery baskets while someone is thumbing down a social feed and deliver those baskets in 30 minutes, you need to be integrated — from attention to payments to fulfillment.

“China has the advantage of being a communist country,” said Vaynerchuk, speaking about corporate infrastructure. “It gave those companies the ability to hold off their competition, be vertically integrated, play politics, be good at innovation, and just scale.”

“I’m shocked that nobody has bought Target yet,” said Vaynerchuk. “I’m convinced that Facebook or TikTok or a content company will buy Target…It’s what Amazon has over everybody. I’m stunned by the big tech companies’ lack of understanding that retail is a component of the stack.”

The “stack” needed for China-like social commerce requires a company to have social media, technology capabilities, content, and an owned retail channel.

If this is correct, it could ignite what Vaynerchuk called “trillion-dollar wars” as large businesses seek to complete their stacks. Amazon, for example, has retail, it has technology, and it has content (Prime Video). It just needs social. Facebook has social; it needs retail.

You get the idea.