There are 901 million Facebook users, and the average user creates 90 pieces of content each month, according to the company. Filtering through this mountain of content to get your message seen by Fans and their friends can be difficult.

Here are 10 Facebook posting strategies that can help increase visibility, improve engagement, and drive more traffic to your ecommerce website.

A study by email marketing company ExactTarget found that 65 percent of Facebook users only access the site when they’re “not at work or school – typically meaning early morning or evening.” That makes sense due to the fact that many workplaces prohibit access to Facebook. Posting only during business hours may be missing a sizable portion of one’s target market.

Another study from social commerce company Buddy Media revealed that brands that posted outside of business hours — early morning, at the finish of the work day, and late at night — had engagement rates approximately 20 percent higher than average.

2. Tell Fans What You Want Them to Do

If you want Fans to “Like” your post, instruct them to do so. Similarly, if you want to encourage comments or shares, ask for them. 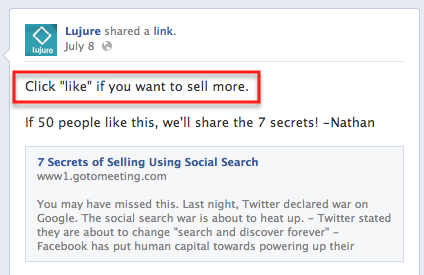 3. Include Exclusive Offers and Discounts

Cater to your Fans by providing special offers, discount coupons, and other content exclusively for them.

Social commerce company VendorShop Social reported — in an April 2012 blog post — that 76 percent of businesses that were successful in using Facebook to increase sales launched a new product to their Facebook stores first or ran promotions exclusive to Facebook.

One easy way to do this is through a new form of advertising called Facebook Offers. Using Facebook Offers, businesses can share discounts with customers by posting an offer on their Facebook pages, which then appears in Fans’ news feeds, increasing the chance it will be seen.

One offer — from health and beauty ecommerce company Coastal, which gave fans a free pair of eyeglasses — received nearly 130,000 responses, more than 1,100 Likes, and 247 comments.

Facebook provides a function where Fan page administrators can “pin” posts to the top so that they are more visibile over a longer period of time. 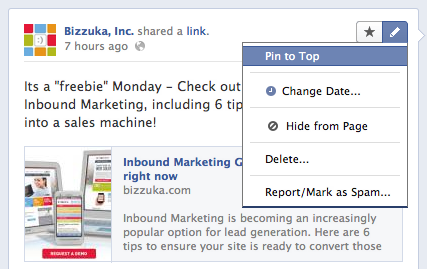 Pin a post to keep it at the top of your Timeline.

If you have a post that you really want Fans to see and react to, pinning is one way to achieve that goal.

Another new form of advertising is Promoted Posts.

My article “Facebook Promoted Posts: Getting Started” details how page administrators can turn any Timeline post into an ad that appears at the top of Fans’ news feeds. According to Facebook, Promoted Posts increase the potential reach of a given post so an even larger percentage of your audience and the friends of those interacting with your post will see it. 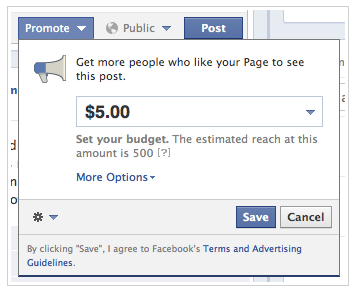 Facebook’s posting interface includes the ability for page administrators to create polls and ask questions. This type of post turns a broadcast message into an interactive dialogue with Fans, and is in keeping with Facebook’s true nature as a social network. Use poll questions to get feedback, recommendations, and learn from your Fans.

When asking poll questions, use words like “why,” “when,” “would,” and “should,” as those typically drive higher engagement.

The ability to highlight posts is another feature merchants can use. Facebook Timeline is divided into two columns. Highlighting a post causes it to span both columns. The increased space makes the post more prominent and gives it a greater sense of importance. 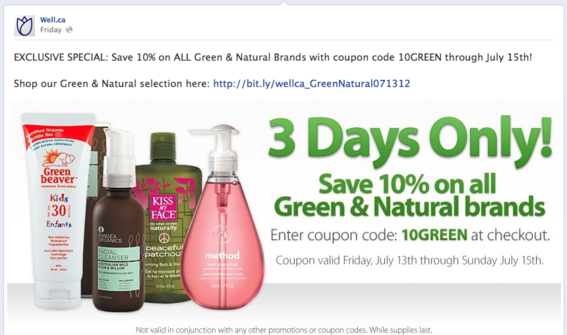 Highlighting posts give them more prominence and visibility.

8. Use Videos and Images

Video is highly engaging and involves more of the senses than the written word. The same can be said of images.

A blog post by AllFacebook.com reports that a study conducted by social commerce company Roost found that photos account for an average of 50 percent more impressions than any other post type, as well as 22 percent more interactions. 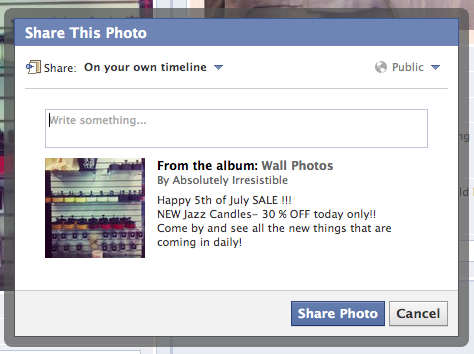 Sharing posts from other pages can increase traffic and engagement.

Not only is this good public relations, the fact that you have shared the post is highlighted on the other page, which can lead to more traffic to your page and further increase the chance for engagement.

Sponsored Stories are posts that you pay Facebook to highlight, increasing the chance others will see them.