The Christmas shopping season will be here before you know it. Shoppers begin making holiday purchases as soon as October. Those earlier purchases could help drive online sales to a new record in 2018.

For the past five years, I have made a few holiday sales predictions. For 2018, I am betting on early shopping, mobile commerce, voice shopping, and free shipping.

1. Black Friday, Cyber Monday Week Will Be 37 Percent of Total

For 2018, I predict that the period between Thanksgiving Day (November 22) and Saturday, December 1 (the end of Cyber Monday week) will represent 37 percent of total U.S. holiday retail sales. 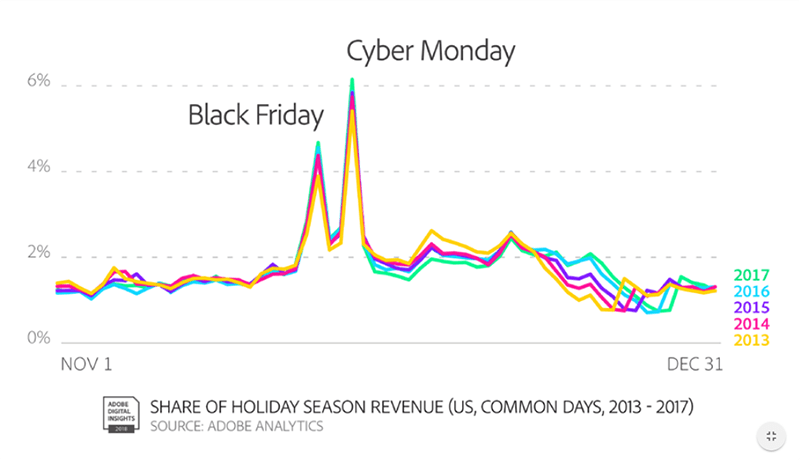 Adobe reported that Black Friday and Cyber Monday are the two top days for retail sales.

2. Mobile Sales Will Be 52 Percent of Total

Mobile commerce continues to grow. So I am not alone in this prediction. After mobile’s exceptional performance during the 2017 Christmas season, every prognosticator in the industry is betting heavy on mobile’s continued success. I see no reason to buck the trend.

We might even see particularly strong mobile sales on Thanksgiving Day. The scenario goes something like this. A shopper wants to take advantage of Black Friday deals, which will start around noon on Thanksgiving Day. But that same shopper has to have three Thanksgiving meals — one at her mom’s house, one at her husband’s mom’s house, and one at the house of her pushy friend, who won’t take no for an answer. All of that feasting cuts into shopping time, so she’ll make purchases from her phone when she has a spare minute or two.

3. Voice Shopping Will Be 3 Percent of Sales

Digital voice-driven assistants will impact U.S. retail ecommerce sales during the 2018 Christmas season. My best estimate is that something like 3 percent of purchases will be made via voice device.

One possible key to this trend will be the use of Alexa skills — voice apps that enhance Alexa devices. And several retailers have already developed skills that can help shoppers buy online with just a few words.

Underlying this trend is the fact that many Americans have and use voice-driven assistants. For example, according to the Pew Research Center in 2017, 46 percent of Americans used one of these devices. 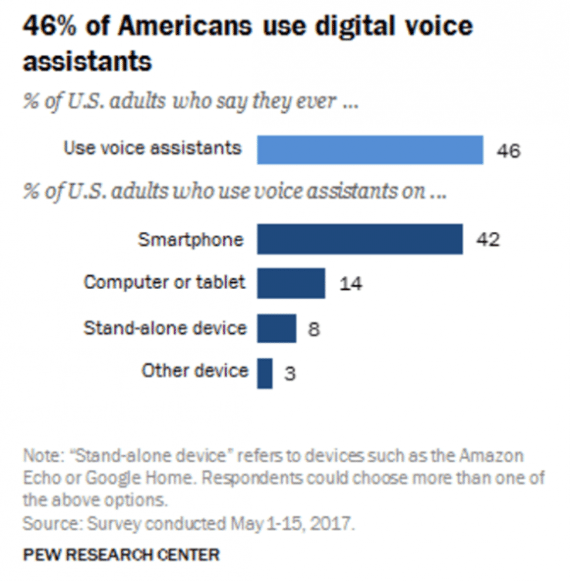 Pew Research said in 2017 that about 46 percent of Americans used a digital voice-based assistant.

4. More Than Half of Holiday Orders Will Include Free Shipping

This is the second time in the last five years that I have made a prediction around the percentage of online orders that include free shipping. Last time around, in 2017, this was a bit hard to measure. Nonetheless, there are many indications that shoppers still love free shipping. With holiday shopping starting earlier, a large portion of those shoppers might find they are eligible for free (slow) shipping since the orders should still have plenty of time to arrive before Christmas.

As mentioned above, each September since 2013 I have made a series of predictions about the coming holiday season. In the 2017 edition, I made four bold predictions. If you grade me with a touch of generosity, I was correct on three or four.

“Winter Weather Will Impact Holiday Retail Sales.” This one turned out to be hard to measure. I found a Washington Post article about how harsh weather was impacting retailers right after Christmas. Similarly, Footwear News reported that “record cold weather in the U.S. impacts retail sales post-holiday.” So we could say the weather was in play, but it might have been the case that it was after Christmas rather than before.

“25 Percent of U.S. Ecommerce Sales Will Come From Mobile.” According to the Adobe Digital Insights 2017 Holiday Recap report, purchases made from mobile devices accounted for 33.1 percent of online holiday revenue, totaling some $35.9 billion in the United States. Thus I underestimated mobile’s share of ecommerce, but I am still taking this as a win, since I was, essentially, predicting significant mobile commerce growth, and, in fact, mobile holiday sales did grow about 28 percent for the year.

“Self Gifting Will Be Big.” This one was also difficult to measure. Did you purchase a gift for yourself?

“Ecommerce Sales Will Grow 18 Percent.” Let’s hear from our sources. “In 2017, retailers posted their best holiday season since 2011. Total retail sales in the U.S. climbed 5.5 percent in November and December, aided by a 17.8 percent increase in retail ecommerce sales,” according to a March 2018 eMarketer report.

If we go with the eMarketer data, my prediction was within the margin of error.