Has Crowdfunding from Ordinary Investors Been Successful?

May 2017 marks the one-year anniversary of the implementation by the U.S. Securities and Exchange Commission of Regulation CF crowdfunding for non-accredited investors. Some observers believe it is a disaster while others think it has been a modest success. Almost everyone agrees it needs to be changed to be effective in providing capital to startups and small businesses. Last year, in fact, the “Fix Crowdfunding Act” was passed in the U.S. House of Representatives but not the Senate. It will likely come up again in 2017.

In the JOBS Act of 2012, Congress approved crowdfunding investments by non-accredited investors — those with assets under $1 million or annual earnings of less than $200,000. The S.E.C. did not finalize regulations until February 2016 and the first portals were approved shortly thereafter — funds can be raised only via approved online portals and the maximum that a company can raise from non-accredited investors is $1 million a year. As of April 2017, there were 26 approved portals but not all of them have executed successful raises. 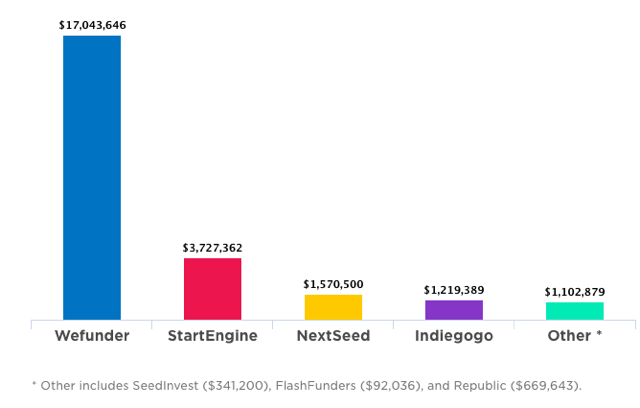 Between May 16, 2016 and April 27, 2017, 29,623 individuals invested in 88 successful Regulation CF offerings worth $24.7 million, according to CF portal Wefunder, which reported that it accounted for 69 percent of the funding and 67 percent of the offerings. Three companies raised the maximum $1 million allowed, all on Wefunder.

The top five categories for all Regulation CF fundings are as follows.

Wefunder has been more successful than other portals because it was a pioneer in encouraging businesses to use fundraising mechanisms other than straight equity. Companies raising money on Wefunder offer revenue sharing, loans (rather than equity), and convertible notes that pay interest and then convert to equity at a later date. Debt CF fundraising has proven to be more popular than equity crowdfunding because equity is typically illiquid. One portal, NextSeed, offers debt crowdfunding exclusively.

Most Regulation CF crowdfunding portals are now offering a SAFE — Simple Agreement for Future Equity — that offer investors the right to discounted shares at a future date. The number of shares is determined at the next qualified equity financing (such as venture capital) and the conversion price per share is based on the price per share in that qualified financing.

An interesting aspect of CF crowdfunding is the incorporation of many of the features of rewards-based crowdfunding sites, such as Kickstarter and Indiegogo. Videos, perks, social media sharing, and a comments section for potential investors all mirror campaigns on reward-based portals. These are in addition to all the financial and other filings required by the S.E.C. This meshing of the two models is now the standard for CF crowdfunding.

Several of the successful CF crowdfunding companies initially raised funds on either Kickstarter or Indiegogo, establishing a track record of fundraising and securing a list of potential investors.

Indiegogo just recently entered into an arrangement with MicroVentures, an approved portal, to offer CF crowdfunding. Kickstarter has stated that it is not interested in CF crowdfunding.

The four-year wait between the passage of the legislation and the implementation of Regulation CF meant that many entrepreneurs that might have raised money from unaccredited investors sought funding from accredited investors instead. Reg D, enacted by the S.E.C. as part of the JOBS Act soon after the legislation was passed, is particularly attractive because of the less rigorous regulations.

Regulation D allows a company to solicit and generally advertise an offering, but the company is still deemed to be undertaking a private offering and does not have to register it with the S.E.C. Many CF portals started offering Reg D fundraising when it became clear that CF fundraising would be delayed for years.