A new study seeks to better understand how businesses may use Facebook to go beyond just acquiring Likes, to engaging and communicating with customers in effective and measurable ways.

The study comes from Internet analysis firm comScore and includes data from comScore’s “Social Essentials and AdEffx” projects as well as internal Facebook data. The report, “The Power of Like 2: How Social Marketing Works,” is the second in a series of studies aimed at social media marketing on Facebook. It is also worth noting that Facebook actively participated in the research.

“While the vast majority of large brands today have an active social media presence, ” the study said, “there continues to be an over-reliance on simple counting of Facebook Fans as a key performance metric. Given that a brand has acquired a certain number of Fans, its goal should be to deliver maximum reach, achieve brand resonance, and hopefully influence consumers to purchase or engage with the brand. To achieve these objectives, brands must begin with a framework for understanding how its brand message is delivered at scale. ”

According to comScore, that framework for understanding includes three dynamics: Fan Reach, Engagement, and Amplification.

Of course not everything that a business posts on Facebook is necessarily shown to every follower. As comScore points out, “Facebook uses an algorithm to help optimize the messages users see in their News Feed, and while the exact algorithm is not public information, it is clear that relevance plays a role in message visibility. So brands in which consumers engage more regularly, whether through a comment, share, like, or check-in, have a greater likelihood of being seen on the News Feed, otherwise known as Fan Reach.”

With this in mind, businesses marketing with Facebook should consider tactics that encourage Fan interaction, increasing the chances that posts will be seen, and thereby boosting Fan Reach. Possible tactics might include asking questions about Fan preference. 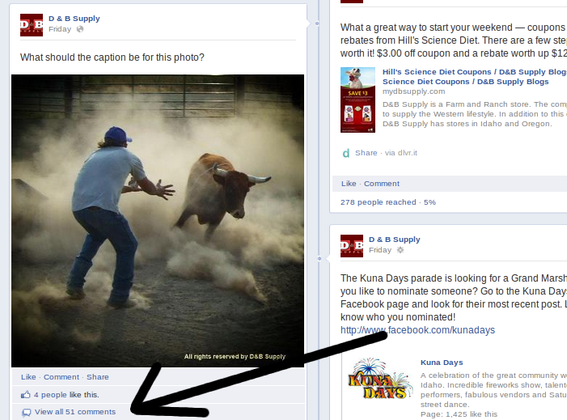 The “engagement” dynamic complements Fan Reach. If Fans engage with a post, Fan Reach is potentially increased Fan Reach may lead to more Fan engagement, creating the kind of virtuous cycle that will help a business sell more.

Facebook has what some consider to be very low engagement rates. For example, a May 2012 study from the Australia-based Ehrenberg-Bass Institute for Marketing Science, a marketing research firm, found that even the best Facebook brand categories tend to have only a 1 percent engagement rate. Also in May 2012, Facebook took something of a blow when one of the world’s largest advertisers, General Motors, said that promotions on the social network were not effective and that it would slash its Facebook advertising budget from $10 million to zero.

Engagement of even one percent, however, may actually be fairly good. The comScore study points out that some online banner advertising enjoys just a 0.1 percent click rate. And if a given Facebook post reached 1 percent of a Fan base of 5,000 or 10,000 this could be as effective as some other forms of promotional marketing.

One key to consider is that Fan engagement may amplify a business’ online branding and influence.

“Amplification is perhaps the most important, and least understood, element of achieving brand reach and resonance on Facebook,” the comScore study said. “The idea behind amplification is that Fans who are reached with brand messages can also serve as a conduit for brand exposure to Friends within their respective social networks.

“Because the average Facebook Fan has hundreds of Friends, each person has the ability to potentially reach dozens of Friends with earned impressions through their engagement with brand messages. Due to factors like Fan Reach, the average brand message from the Top 1,000 brands on Facebook is able to deliver an actual amplification of 81x if their efforts are maximized. In practice, while organic virality at times falls short of this ideal scenario, brands are often able to double the reach of their Page Posts through Friends of Fans.”

Amplification, according to comScore, may also be impacted with some of Facebook’s newer marketing vehicles like Promoted Posts, which we’ve addressed here recently, in “Facebook Promoted Posts: Getting Started.”

The idea here is that posts that appear on a Fan’s new feed may also be shown to that Fan’s friends.