Canadian-based ecommerce platform provider Shopify filed for an IPO in the United States and Canada last month hoping to raise $100 million. The valuation is expected to come in at $1 billion. The company will be listed on both the New York Stock Exchange and the Toronto Stock Exchange. 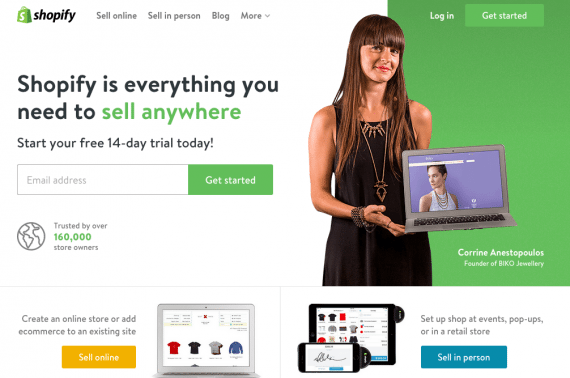 According to it SEC filing, Shopify has roughly 162,000 merchant customers in 150 countries.

The company needs an injection of funds to provide new products and services as well as bolstering marketing efforts. Sales and marketing expenses increased $3.8 million, or 39 percent for the three months ended March 31, 2015 compared to the same period in 2014, mostly because of an increase of $2.5 million in marketing program expenses such as Google AdWords and advertisements on social media.

Shopify receives most of its revenue from sales of subscriptions to its platform. It also gets payments for domain name registration and sales of store themes and web applications. The company also garners revenue from merchant solutions — payment processing fees from Shopify Payments, transaction fees, partner referral fees, and sales of POS hardware. Merchant solutions supplement the platform by adding value in the form of related services required by merchants.

Shopify Payments, introduced in 2013, is the driver for both the increase in revenue from merchant solutions as well as costs. According to the filing, “Gross profit margins on merchant solutions are typically lower due to the associated third-party costs of providing these solutions. As a result, the introduction of Shopify Payments and the resultant shift in the mix of revenue sources has affected our overall gross margin. More specifically, while our total revenues have increased in recent periods as a result of offering Shopify Payments, our overall gross margin percentage has decreased in these periods.”

Keeping Up with a Changing Market

A challenge for all platform providers is to keep up with increasingly complex selling scenarios. For example, Shopify has put a good deal of effort into providing an omnichannel platform that lets merchants sell products via websites, social media storefronts, brick-and-mortar stores, and pop-up shops. It also enables commerce from tablets and smartphones. Currently, half of Shopify’s merchants’ storefront traffic comes from mobile devices and one quarter of Shopify’s customers have a Facebook store.

Shopify is going head-to-head with rival Bigcommerce, which is purchasing Zing, a startup that makes checkout software and inventory management tools for brick-and-mortar businesses. Bigcommerce has 85,000 customers, roughly half the number Shopify has. Over the past year, Bigcommerce has formed partnerships with companies like Square and Lightspeed POS to allow them to offer Bigcommerce’s software to physical retail stores. Bigcommerce is also expected to go public, perhaps later this year. The other major Shopify competitor is Magento, eBay’s ecommerce platform.

The successful IPO of Etsy — see my article “Can Etsy Keep Artistic Roots with IPO?” — bodes well for Shopify and other ecommerce companies seeking to go public. Etsy closed its opening day of trading at $30 per share, 86 percent above its initial price of $16 per share. The company raised over $287 million and the company was valued at nearly $1.8 billion. Etsy is now worth more than $3.5 billion.