Office supply retailer Staples announced March 6 that it would close 225 brick-and-mortar retail stores by 2015, in part, focusing investments and marketing on the online channel. The move may provide examples of why the ecommerce channel is so important to retail and lessons, if you will, for other merchants.

For Staples fiscal fourth quarter, which ended February 1, the company’s total retail sales fell about 10.6 percent to approximately $5.9 billion. The company has faced increases in inventory and problems with retail overcapacity. As a result, Staples missed its sales and profit projections.

To help solve some of these problems, Staples is doing many things, including focusing additional efforts on ecommerce. This invigorated ecommerce effort, may provide a few lessons or considerations for the online retail business and new ecommerce entrepreneurs who could be thinking of opening an online retail store.

To help solve some of these problems, Staples is doing many things, including focusing additional efforts on ecommerce.

While interpreting these lessons from Staples’ action will require some speculation, here are some of the things worth thinking about.

Ecommerce May Cost Less and Be Changeable

Brick-and-mortar retail can have a relatively high cost of entry since merchants need to lease or buy buildings, order fixtures and equipment, hire employees, and outfit the location with inventory.

In good times, these locations are well worth the investment, but they can also become costly when buying habits or conditions change.

In Staples case, the demand for its office supplies and equipment has been waning, but it was compelled to keep open something like 1,800 stores — some profitable and some not — contributing to a office supply  retail oversupply.

Staples physical stores may have also been subject to changing location dynamics. Perhaps, competitors opened new stores near an existing Staples location, or maybe a retail neighbor who had been contributing to shopping center traffic closed or moved elsewhere. Even changes in roads or new home construction can have an impact on retail store locations, which in turn are not easily adapted.

In fact, doing what Staples is proposing, intelligently and systematically closing some locations, is probably the best thing that the company can do to respond to the business changes and challenges it faces.

Even retailers committed to having physical stores can use ecommerce to test locations or regions. For example, rather than spending thousand to lease space in a mall for five or ten years, a retailer might test out the location for six months using a kiosk that featured a handful of select items and iPads that show the retailer’s full product catalog. This test kiosk could even offer free overnight shipping for catalog items, and eventually provide insights about mall traffic and customer buying behavior that demographics could not have.

Similarly, retailers could test new product lines online first before investing in square footage. Staples stated that it needs to change or add to its product offerings. Some of these new products will appear in physical stores, but other lines could be tested online first.

If Staples actions are being interpreted properly, the company is saying that ecommerce costs less and is more adaptive than its brick-and-mortar counterpart.

Ecommerce may provide better customer service and satisfaction than the brick-and-mortar shopping experience for some product categories.

Staples does not sell sexy products. Pens, paper, printers, and the like are not usually the fodder of emotionally driven consumerism. Folks don’t often enjoy going shopping for office chairs, waste baskets, or even office cleaning essentials, which were recently featured on the Staples home page. 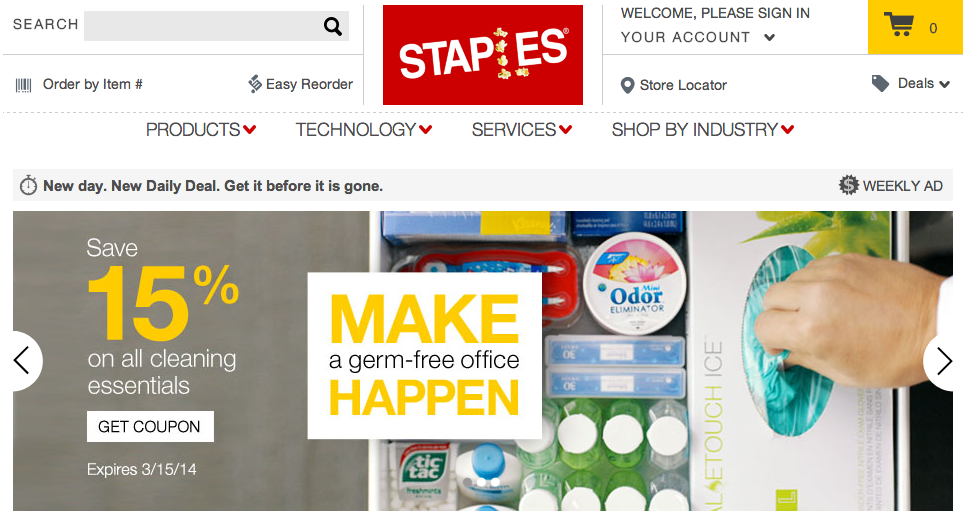 With this in mind, online orders can actually offer a better shopping experience. Shoppers who just need coffee filters for the break room and pens for the accounting department, should find ordering online far more convenient.

Similarly, many office supplies are considered commodities, so that shoppers will want to be able to compare prices online before deciding where to get file folders or document storage boxes. Why, in that context, would someone want to visit a physical store?

Staples, which is also adding to its business-to-business sales force, seems to be indicating that customer service is not confined to physical locations.

To revisit the point made about customer comparing prices online that was mentioned in the previous section. Staples actions may also demonstrate that online price competition is very stiff and retailers need to find ways other than just price to differentiate online.

Here is what Staples CEO and Chairman Ron Sargent said in response to an analyst question about pricing.

“It is much more about the value proposition versus strictly the price. We’re going to continue sharpening pricing in a lot of key categories to ensure that we in the reasonable range of online competition. … I don’t think we have to be the lowest price on all items, but there are many other things that are important to customers. Things like free next day delivery with no minimum order size [or] five percent back for Rewards customers,”

Faced with changes in product demand, location dynamics, and customer shopping behavior, Staples announced that it would close about 12 percent of its stores by the end of 2015.

The company may have also reminded retailers that ecommerce, with its promise of low costs, adaptability, and great customer service, is vital for the future of retail and is an opportunity for new entrepreneurs.