Vine is a new iOS app that allows users to record six-second, looping videos — called “vines” — on their iPhones, iPod Touches, or iPads. The videos can then be shared with followers on Twitter and Facebook. Users can shoot very short clips, then edit them together to create stop-motion-style animation videos.

Businesses are experimenting with different ways to use Vine to promote their products and services. Here are eight suggestions for its use, with examples.

Vine provides merchants with an easy way to inform customers and prospects about new products. Include a link to the product in the Tweet to drive traffic.

Candy maker Red Vines used Vine to promote its products with this Tweet soon after the app was launched.

better marketing than a super bowl ad. @redvines: We made a @vineapp Vine video of Red Vines. #Vineception vine.co/v/b5D7vzrz6OY

2. Show a Product in Use

Draw attention to your products by showing them in use. In the following example, Gap created a Vine video that showcased women wearing various shoes with a particular style of pants.

Another way to show products is by getting customers to demonstrate them. In this video, a GoPro customer recorded a video of his new camera, which was accompanied with a Twitter hashtag.

4. Take Visitors Behind the Scenes

Use Vine to provide a behind-the-scenes glimpse of your business, its employees, and operations. In social media, people tend to trust other people rather than brands. Use Vine to put a human face on your business.

Retailers can create contests on Vine, adding creativity and excitement to other contest efforts, such as those on Facebook and Pinterest.

In this example, >Urban Outfitters and Converse invited fans to submit a vine documenting “a day in the life of your Converse sneakers” and Tweet it using the hashtag “#yourchucks.” Winners received trips and Urban Outfitters gift cards. 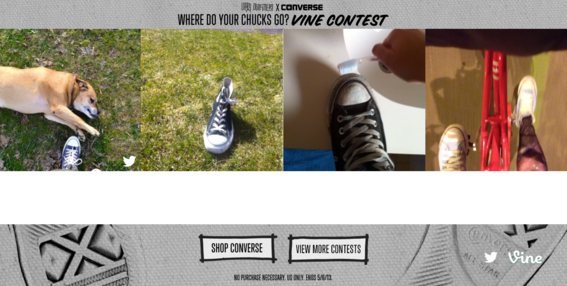 Get customers to submit videos showing a product in use as they will encourage other shoppers to buy, too.

One of the most highly touted marketing campaigns using Vine comes from building-supply retailer Lowe’s. The company created a series of videos that provide tips on how to unscrew a stripped screw, organize cleaning products, and clean a cookie sheet, among others.

Tom Lamb, chief marketing officer at Lowe’s, said of the campaign, “What consumer behavior is forcing us to do is learn to be incredibly concise. We’re making an effort to demonstrate that we know a little bit, so [consumers think] it’s worth seeing what else we know on our site and in store.”

Twitter now provides affordable advertising options for small businesses. Use a Vine video to gain added attention and get extra mileage out of the promoted Tweet.

One of the reasons Vine has become such a popular app is because it’s fun to use and offers anyone the opportunity to become a mini-movie director. This applies to businesses, too. Have some fun making these short videos.

How to Use Vine