The announcement that WordPress’s parent company, Automattic, would purchase WooThemes and its widely used WooCommerce plugin could be good news for online sellers using the ecommerce platform.

WooCommerce, which by some estimates powers more than 1 million ecommerce-enabled websites worldwide, is already tightly integrated with WordPress. But once it is part of Automattic proper, the ecommerce plugin will almost certainly enjoy accelerated growth and expansion. 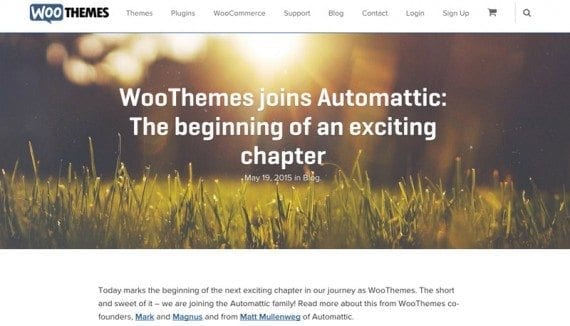 Automattic announced that it would acquire WooCommerce last month.

In an email discussing the acquisition and how it might impact current WooCommerce users, Automattic’s CEO, Matt Mullenweg, said the purchase “means that WooCommerce will have the full support and resources of Automattic behind it, including our engineers, designers, bankroll, systems, and experience. WooCommerce should notice the plugin evolving to become faster, more secure, and meet their needs even better than it has in the past.”

As Mullenweg implies, WooCommerce may benefit from access to additional resources from within Automattic.

Depending on Automattic’s strategy, this could mean that some features, which are now available only as paid WooCommerce extensions, may become part of WooCommerce’s standard feature set.

As an example, one of WooCommerce’s greatest weaknesses may be that it does not offer a built-in bulk product import and update feature.

Rather, merchants using WooCommerce who wish to import or update large quantities of products simultaneously must either develop their own WooCommerce extension, write some database connector, or purchase an extension, like WooThemes Product CSV Import Suite, which, at the time of writing, costs $199.99 for a single site license.

This one feature, which represents the ability to update large portions of the product catalog daily, may be a barrier to brick-and-click sellers that need to synchronize online and in-store inventory levels or to merchants who also wish to sell on marketplaces and must synchronize inventory or rapidly changing prices.

For his part, Mullenweg said that “the WooCommerce team will lead any decisions [around making extensions part of the core], we definitely want the software to be available and useful to as wide an audience as possible, and features like you mention should always be under consideration for being in the core or in extensions.”

How WooCommerce features, like CSV or even API-based product updates, are deployed and integrated may depend on how Automattic wishes to use WooCommerce.

For example, it may be that Automattic simply sees the value in WooCommerce and will focus on revenue generation. After all, $199.99 is not really bad for a feature that, perhaps, not every WooCommerce user will want.

It could also be the case that Automattic sees adding WooCommerce as an opportunity to solidify its spot as the leading website content management system. Squarespace and Wix, as examples, both compete with WordPress and both have a built-in ecommerce feature.

WooCommerce has already enjoyed a significant amount of community support, with many theme developers and plugin makers offering free and paid WooCommerce solutions. But do not be surprised if this acquisition significantly increases WooCommerce development and theming, at least in the short term.

New extensions or themes could make it even easier for small and mid-sized businesses to get started with WooCommerce.

Third-party service providers might also become even more interested in WooCommerce integrations once it is absorbed into Automattic.

WooCommerce for Large Retailers Too

Assuming that WooCommerce growth is good for current users, the platform might also grow to support larger retailers.

WooThemes’ co-founder Mark Forrester has suggested that WooCommerce has a 24-percent market share, making it, perhaps, the most widely used ecommerce solution available. But the vast majority of WooCommerce-powered sites are small businesses.

WordPress eventually might give WooCommerce the clout it needs to compete against enterprise-level platforms.

WordPress VIP is already a respected, enterprise-level content management solution with clients like CNN, The New York Post, Alaska Air, Re/code, Time, TechCrunch, and Izod. Although Mullenweg said that he had “nothing to announce now” related to VIP hosting or a software-as-a-service version of WooCommerce, both seem at least somewhat possible.

Finally, an even closer relationship with WordPress will bolster WooCommerce’s position as a leading ecommerce choice for stores that depend on content marketing to attract shoppers.

WordPress is already a favorite tool for retailers, for publishing articles. With WooCommerce and WordPress together, articles may be relatively more easily integrated or, at least, associated products and posts compared to stores using separate content management systems for products and articles.

Automattic may be able to find ways to strengthen this position.

Although Automattic has not disclosed how much it is paying for WooThemes and its flagship product, WooCommerce, published reports have suggested that the deal is for $30 million in cash and stock. With this sort of investment, Mullenweg apparently believes his company can both improve and grow WooCommerce.