Many countries in the Middle East have immature digital infrastructures and inefficient logistics. But a few have relatively young and affluent populations that are eager to utilize ecommerce despite the problems. As in other regions, Covid-19 has spurred greater online usage in the region.

This article will focus on three of the richer countries: Saudi Arabia, the United Arab Emirates, and Qatar.

The lack of addresses continues to plague ecommerce deliveries. The U.A.E., for example, doesn’t have postcodes. Middle Eastern consumers often don’t provide a full address when buying online. Delivery companies have to resort to electronic messages to consumers, which also captures their GPS coordinates.

Pick-up — either in-store or curbside — is generally not available in the Middle East. Brick-and-mortar stores have just recently launched ecommerce sites in response to the pandemic.

Saudi Arabia is a highly regulated and conservative country with restrictions as to what can be sold online. Much of the Saudi population is still skeptical about online payments and the delivery system. Few Saudi residents have credit or debit cards.

According to Statista, 62 percent of the population shopped online in 2020. Fashion is the largest ecommerce sector, followed by consumer electronics. Most Saudis — 63 percent — access the internet via a smartphone. Ecommerce revenue for 2020 was USD $11 billion, according to Statista. Ecommerce spend per shopper was $527 in 2020.

As for social media, Facebook is the most popular site, garnering 83 percent of social media users. 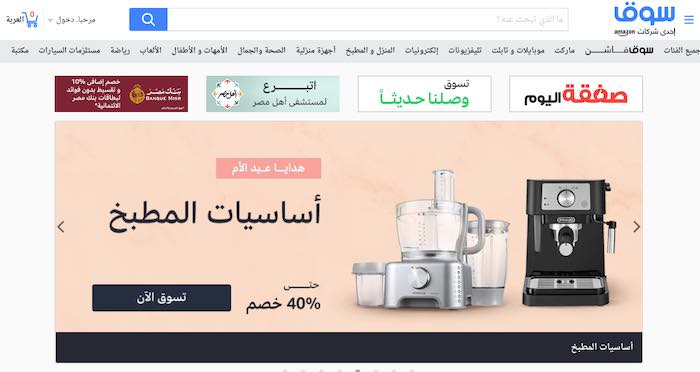 Souq.com, a mass-merchandise online retailer, is owned by Amazon.

Ecommerce growth in Saudi Arabia will likely require the government to streamline laws and regulations to accommodate a digital economy. The country’s leaders have stated that they wish to diversify the economy and reduce dependency on oil. But their inaction suggests otherwise. Import duties and taxes are unpredictable in regard to cross-border sales.

The U.A.E. has a population of roughly 10 million with 90 percent internet penetration. Statista and Visa peg 2020 ecommerce sales in the U.A.E. at USD $20.8 billion. Desktops account for 50 percent of internet access. Sixty-eight percent of the population shops online. Ecommerce spending per shopper was $3,104 in 2020, according to RetailX. Facebook is by far the most popular social media site.

Unlike Saudi Arabia, the U.A.E. has modernized its digital payment system. Sixty-one percent of online shoppers now pay with credit cards or digital wallets instead of cash on delivery. Covid-19 has spurred an increase in such payments, according to Visa. As the government has encouraged cashless payments, many U.A.E. residents made their first online purchase during the pandemic and are expected to continue to shop this way afterward.

Several leading merchants established an online presence during the pandemic, and consumers responded by shifting their shopping habits.

Qatar’s population is just 2.9 million, but almost everyone has internet access. Ecommerce sales were USD $2.5 billion in 2020, according to RetailX, which also reports ecommerce spending per shopper of $1,488 in 2020. The Ministry of Transport and Communications lists 416 ecommerce websites, a substantial increase since the pandemic began. The top ecommerce sites in Qatar are Amazon, Ebay, and AliExpress. Mzadqatar.com is a popular local site.

The Ministry of Transport and Communications launched Theqa in 2019, a non-profit portal that acts as Qatar’s ecommerce entryway. The launch was part of the Ministry’s efforts to enhance consumer confidence and trust in the local ecommerce sector and improve the quality of services provided by local suppliers.

The Ministry also provides merchants with the tools, capabilities, and skills to succeed quickly. To obtain a Theqa certification, retailers must show that their website meets minimum safety and security requirements.