Development frameworks such as PhoneGap and, more recently, React Native make it significantly easier for retail businesses to build and deploy mobile applications for consumers and internal teams.

Radio-frequency identification readers are a common tool in retail warehouses. Fulfillment and logistics workers use them daily to process incoming freight and take inventory. They may even use them as part of the order picking process.

But RFID readers can be relatively expensive. Some powerful new units can cost $3,000 or more. Which brings me to an example of how mobile application frameworks can impact a retail business.

Recently, a mid-market brick-and-click retailer in the Northwestern United States was faced with replacing a half-dozen RFID readers at once. Instead of spending roughly $20,000 for the new equipment, the company deployed a mobile app, using Adobe PhoneGap and several Apple iPods with radio frequency attachments that cost of few hundred dollars each.

The cost of the project, as one might imagine, came down significantly. The iPod-powered solutions were not as powerful as a regular RFID reader in many ways, but they did work for most tasks, and when combined with a few regular RFID readers the business could operate as usual. There were even some tasks specific to this particular retailer that the custom mobile app did better than the more expensive RFID readers.

An important part of this solution was the software — the mobile app — deployed on the Apple iPod.

Using the PhoneGap framework, JavaScript, HTML, and CSS, the company developed its money-saving mobile app in about a week.

PhoneGap was the key in this particular case, but there are other options. In fact, there are perhaps three ways a business might go about building a mobile application for iOS, Android, or Windows Mobile.

The first approach to mobile application development is what one might describe as the normal way: Write a native application, from scratch, for an Apple (iOS) device in Swift or Objective-C.

This approach may give developers the most control and the application the best performance within a specific platform. But it has as a few challenges.

First, developing mobile apps in each platform’s native language means that you need to have a few development specialists: a Swift developer for iOS, a C++ developer for Windows Mobile, and a Java developer for Android.

Third, it can be relatively expensive to develop in native languages since one is paying multiple developers to write multiple apps in multiple languages.

In fact, this approach can price some retail businesses out of the mobile app market or force them to use one-size-fits all ecommerce application services rather than developing a custom application.

PhoneGap takes the second approach. A mobile application using PhoneGap is really a web browser or web view. The developer writes the application — using HTML, CSS, and JavaScript— that is “wrapped” if you will in a native web view for each platform. Native features like the camera or GPS are accessed via PhoneGap.

This approach is sometimes called a hybrid mobile app. It can be a fast and easy way to develop, but may not have the same performance or capabilities as an application writing in the platform’s native language.

PhoneGap, Apache Cordova (of which PhoneGap is a distributor), and Ionic are examples of frameworks that use this model.

Compile to a Native Language

React Native, which Facebook developed for use in its own mobile applications, takes a third approach.

It allows a business to develop an application in JavaScript using the React JavaScript framework, which Facebook also developed for its own use. 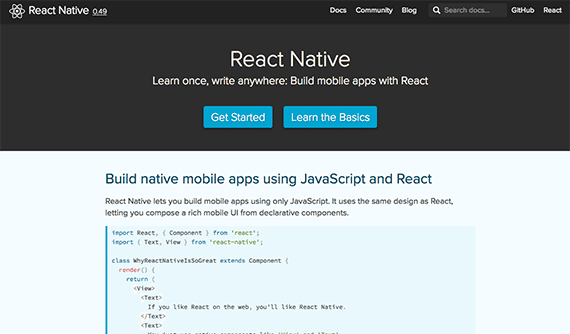 Facebook’s React Native is among the very best mobile development frameworks. It allows for the creation of mobile applications with native performance and capabilities.

React Native employs native language components for its building blocks, meaning that a business can build a single application, using a single language, and deploy that application across all leading mobile platforms while enjoying the performance and capabilities of a typical native-language mobile application.

Another framework, Xamarin, takes this same approach, but uses the C++ language as its starting place, making it possible for developers accustomed to working with Microsoft applications to create a single application with all the capabilities of a native-language app, and deploy it across mobile operating systems.

For a mid-market ecommerce business, staff developers that the company already employs could build a shopping application that accessed the company’s existing database, using languages they already know. Or those same in-house developers could build internal mobile apps to help the business operate without learning new programming languages or having to create different versions of the same application for each platform.