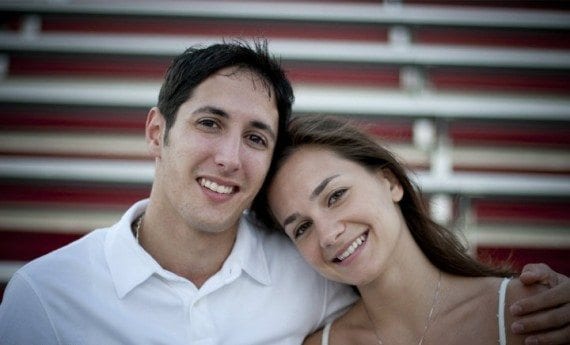 Many of the most successful online retailers sell products that solve problems.

Daniel Rensing, who grew up in Levittown, N.Y., created a clever product that attracted press attention within 10 days of its launch.

When the Rensings relocated to Rockledge, Fla. in 2003, Daniel began a degree in computer graphic and design at Keiser University, in Melbourne, Fla.

He purchased a small vinyl plotter to make small decals for classmates, the biggest sellers being car stickers based on customers’ tattoos.

In mid-2009, Rensing designed for his wife Stephanie, who is an accomplished baker, the Cheat Sheet Apron. It had cooking guides — measures and conversions — printed upside-down on the apron for the cook to read easily. Friends clamored for one; Rensing decided to list the apron on Etsy.

Within 10 days, the editor of the Food Network Magazine, who had seen the apron on Etsy, called Rensing.

“We were featured as one of the top 10 must haves in the kitchen in the magazine’s 2009 holiday issue,” Rensing said.

Rensing launched The Smart Baker on Etsy but quickly “outgrew its limited platform.” He set up a simple website, TheSmartBaker.com, in 2010 using RapidWeaver, a drag-and-drop web platform, but found orders difficult to manage and his developer increasingly expensive as he charged per update, and for specific features. This prompted his switch, in 2012, to Bigcommerce, the hosted platform.

Fast forward to 2015, The Smart Baker has four main product lines: aprons, parchment paper, cupcake towers, and cake pop stands. Rensing sells them on his own website, as well as Amazon, OpenSky.com, and Zulily. His Etsy shop still exists, but he’s renamed it AllCustomGifts.

Rensing’s move in Feb. 2012 to Bigcommerce was prompted by his desire for a new shopping cart platform that would let him add new products, have real time shipping quotes and order confirmation emails, and offer coupons and special offers.

“Bigcommerce had all these, plus great reviews from their customers and ecommerce comparison sites,” Rensing said.

“We can make edits, process refunds, add notes for customers or for staff, enter tracking information and more to manage the details of any order,” Rensing said.

Rensing undertook his own web design, and learned Cascading Style Sheets code to design his site with Bigcommerce.

“Just like a brick-and-mortar store, we want to lure people ‘through the doors’,” Rensing said.

“We provide them with a clean and easy way to navigate our store and keep them in, browsing our ‘shelves’ so that ultimately they leave through the checkout counter.” 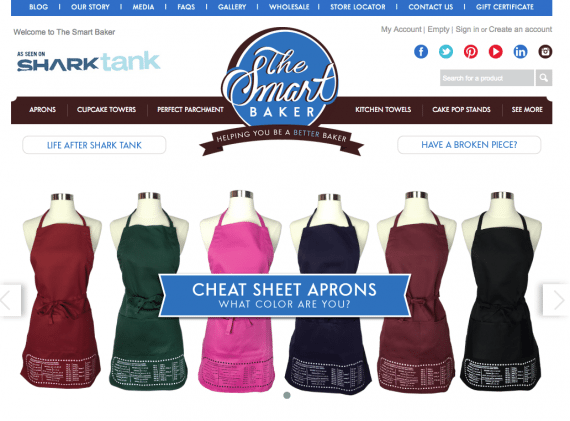 After he moved to Bigcommerce, Rensing moved all credit card processing to PayPal, in March 2013.

“PayPal reduced our processing costs — our new rate is 2.2 percent with no monthly fees — and our customers feel confident to enter their payment information,” said Rensing.

“PayPal has an easy-to-use backend system, easily integrates with Bigcommerce, and has a great customer support system.”

The Smart Baker was hosted on GoDaddy before switching to Bigcommerce.

Then came his appearance on Shark Tank. Worried that Bigcommerce’s servers would fail to handle a large traffic spike or process the orders, Rensing contacted Bigcommerce and gave its technical support team about two weeks’ notice before the show aired.

Rensing now has two part-time employees that use step-by-step procedures for the business’s different processes.

“These [procedures] allow me to easily train any employees,” Rensing said.

In 2010, he hired a part-time employee to handle order fulfillment, so Rensing could concentrate on running the business.

“Now that we have an office and warehouse in Rockledge [Florida], our two part-timers run our laser machines, and palletize orders,” Rensing said.

He pays a freelance SEO consultant (from oDesk) $500 per month to create and distribute articles, and implement on-site keywords.

“Our SEO efforts are to keep our site content fresh, utilize our blog, and write our social media pages, which all drive sales,” Rensing said.

Most order fulfillment is done in-house, except for the inventory sent to Amazon for its Fulfillment by Amazon service, for products that the Rensings sell on Amazon’s marketplace.

“Otherwise, we package and ship our retail and wholesale orders from our warehouse, which helps us manage our costs and provides the quickest turnaround,” Rensing said.

Originally Rensing made every product himself. He has many different pieces of equipment at his Florida warehouse to do this, including a CNC machine (for cutting products), laser engraver, wide format digital printer, vinyl plotter, heat press, and die cut machine.

But he started outsourcing production in 2009, just before the Food Network Magazine feature.

Most of The Smart Baker’s 88 products are made overseas, but the custom cupcake stands and parchment papers, and well as other personalized products are manufactured in-house.

Rensing wanted to get products manufactured locally but as most companies send production overseas, he sourced a factory in Ningbo, China through manufacturer directory Global Sources.

“We flew out to meet the production managers and workers who would make our products. Since I already made everything myself, it was very easy to explain what we needed and how to make it,” Rensing said.

Rensing uses Skype and email to stay in touch with his factory manager about the production process.

Like most every retailer, he’s experienced too much product, and then not enough.

“We still do physical counts to confirm inventory, and record these quantities in our Bigcommerce backend. Once our inventory thresholds are met, we add those products to our production queue,” Rensing said.

Rensing outsources his QuickBooks accounting to an accountant.

While Rensing is aware QuickBooks can integrate with Bigcommerce’s backend, “by hiring a professional, I know it’s done right and in the fraction of the time.”

He now concentrates on Instagram, FoodGawker.com (a Pinterest-like site), and other food and recipe-sharing sites and blogs, which have led to some orders.

“If what we spend money on isn’t essential or doesn’t provide a return on investment, I cut it,” Rensing said.

“I also don’t accept the first price for anything. This helps keep our expenses in check.”

Rensing is committed to having 100 percent satisfied customers.

“If someone is unhappy, it affects me personally; I literally take customer service to heart,” Rensing said.

For example, in December 2014, The Smart Baker had closed for Christmas. Rensing received an urgent Facebook message from a local bakery seeking two sets of cupcake towers for a holiday wedding as the bakery’s rental sets hadn’t been returned.

“Although we were closed and I was in another state, within 20 minutes my parents had two cupcake towers ready for the bakery to pick up,” Rensing said.

“The bride and groom will never know how they got their perfect wedding cupcake display.”

As for mistakes, Rensing cites handing over responsibility of The Smart Baker’s advertising and marketing — everything from product photography and press kits to product launches — to another company.

“We spent almost $30,000 in a few months, but they missed deadlines and had poor attention of detail; we were unable to complete many projects. It was a poor return on investment,” Rensing said.

To save money, he cut his AdWords spending and other online campaigns.

Also, Rensing regretted being too quick to say “yes” and not fully consider the consequences when he wasn’t completely retail-ready when Jo-Ann Fabric and Craft Stores approached The Smart Baker to stock its products. The lack of retail readiness caused Rensing tremendous stress with the short lead times and unexpected extra costs. He had to spend three to five times the price of customary ocean freight — switching to air freight — for his initial purchase order inventory, to ensure the product was on Jo-Ann Fabric’s shelves in time.

Rensing believes calculated risks can lead to better results and even bigger rewards.

On Shark Tank, Barbara Corcoran, a panelist-investor on the show, offered Rensing $75,000 for a 40 percent share of The Smart Baker, with a 5 percent royalty until her investment was paid back.

Rensing decided not to accept the deal because Corcoran wanted him to do large-scale distribution with Walmart, which he believed would dilute his brand and product quality.

“However, Jo-Ann Fabrics supported us. They took the time to explain how they operate, were quick to communicate and they have been transparent with their intentions with our products.,” Rensing said.

“We have about 500 [Jo-Ann] stores with our products and are excited to see where we will expand to next.”